On our brief visit to Rumbak in the summer of 2019 we noticed so much change that it made us think it would be interesting to record these and to document how it was when we lived there in the 1980s and 90s. Raghu lived there while researching snow leopards and their ecology for his PhD and Joanna was there to film the wildlife of the region.

During lockdown, Raghu gave a couple of presentations on Ladakh. It renewed his memories and reconnected him to the world from which he had remained detached for over a decade. “After thirty-five years of working with large carnivores, I see my original data from a different perspective. It will be interesting to critique and reinterpret my own data with a better understanding of snow leopard available to us now.”  In the absence of such documentation, with each generation, baselines shift and with these shifting baselines, perceptions also change.  In conservation science this syndrome of shifting base line is described as “conservation amnesia”. At times these altered perceptions can hamper our understanding of the real conservation issues. 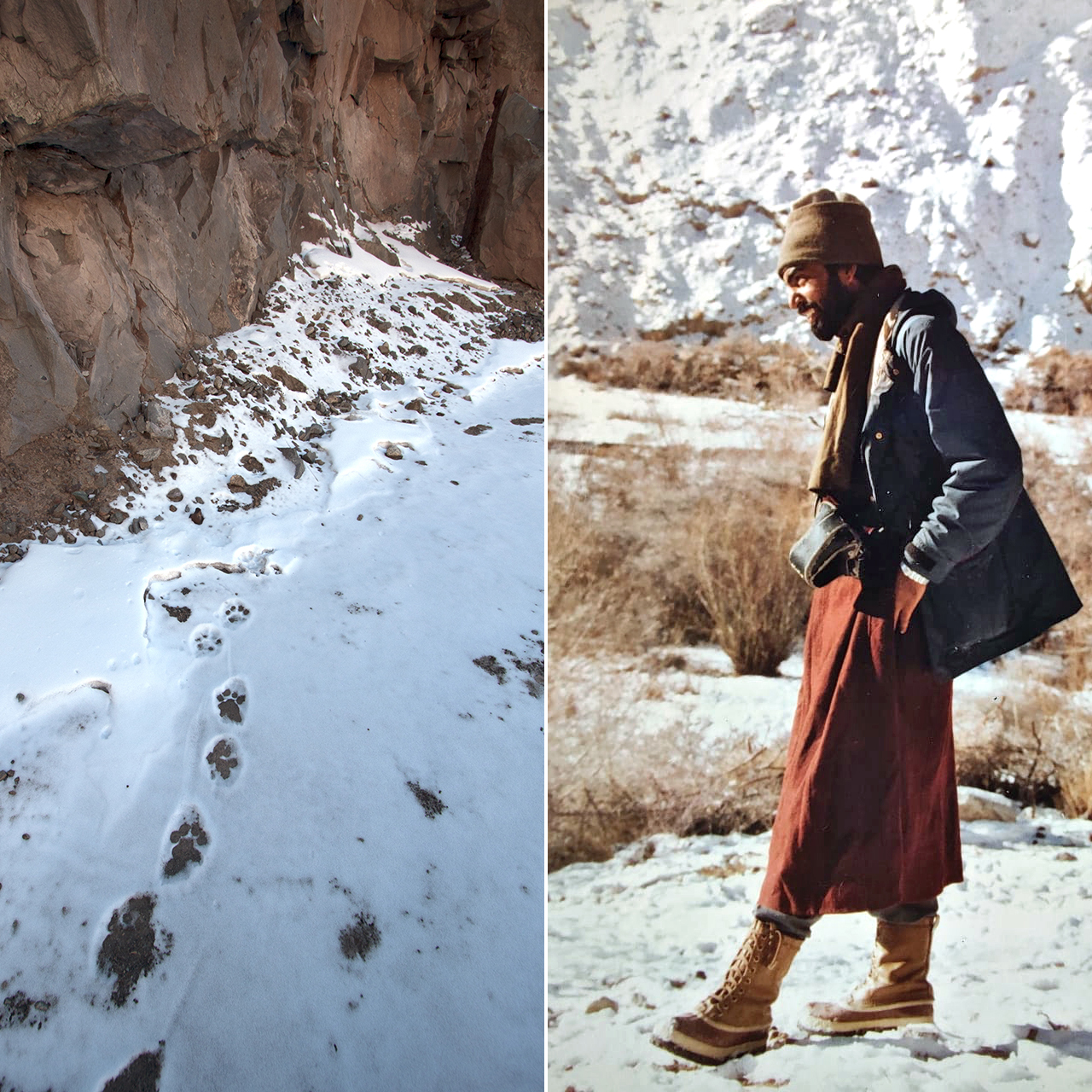 When Raghu began work on snow leopard, very little was known about them and understanding about its natural history was almost zero. Forget snow leopards themselves, little was known even about their signs and how to find them, so when the team found their first snow leopard tracks in 1985, it instantly became international news. It was the equivalent of a post going viral in today’s parlance. In those early years, the research focus was on sign surveys to assess status but it soon moved to understand snow leopard habitat preferences and food habits. It is only in the last couple of decades, with enormous help from technology, that our scientific understanding has advanced by leaps and bounds. When Raghu moved away from the snow leopard realm and into tigers, his main reason was to work with a carnivore where he could collect a wealth of data. In the eighties, snow leopard research was hard work with very little reward and therefore frustrating, because there were so many basic questions that were impossible to answer—space requirement was one of them. 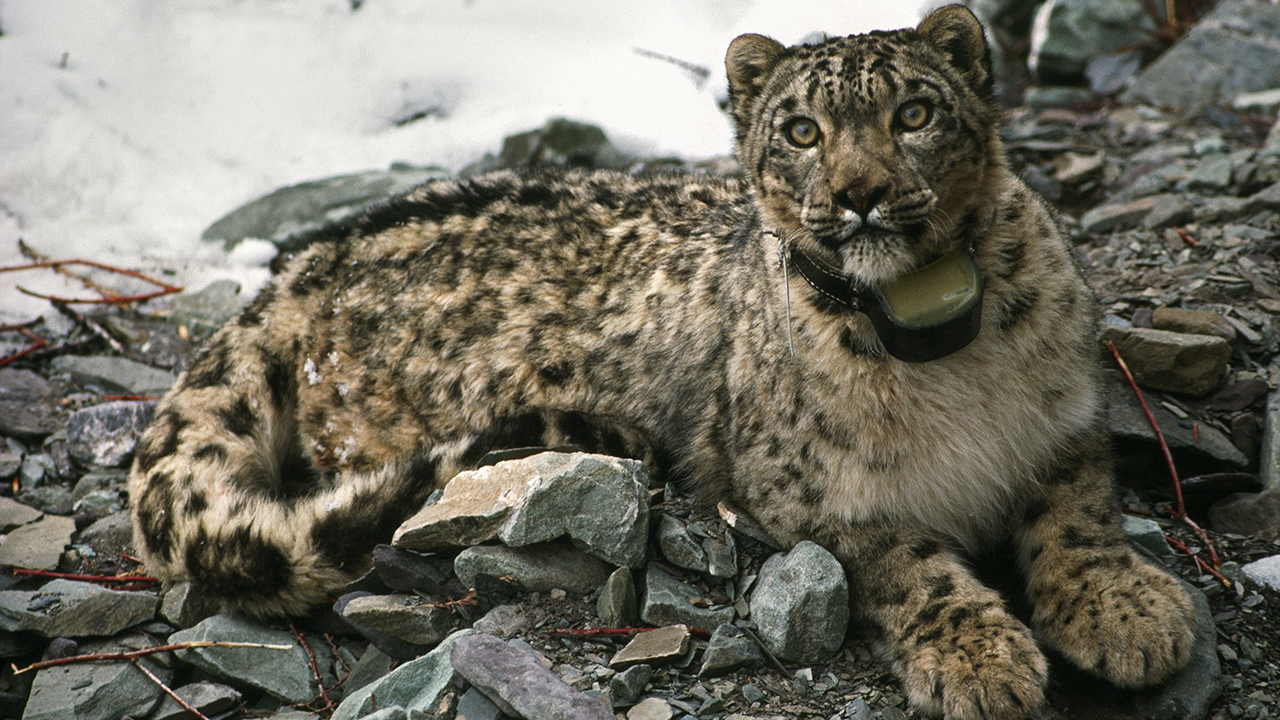 Raghu attempted telemetry and he radio-collared one male snow leopard. However, he very quickly realised that it was next to impossible to track even the radio-collared snow leopard on foot. At that time GPS and satellite tracking systems were unheard of. Armed with VHS receivers, he was really only plotting his ability to locate the snow leopard, not its full range. When we are young, we take on challenges differently. As long as the collar was on it, he followed the snow leopard madly but was always running way behind by a couple of valleys.  Mostly clueless about its location it was almost a relief when the snow leopard dropped the collar— relief because madly following a collared snow leopard left no time to work on other aspects of his study and he was anyway not getting the data he wanted on the collared animal. With no collar, he had to find other ways of collecting information. 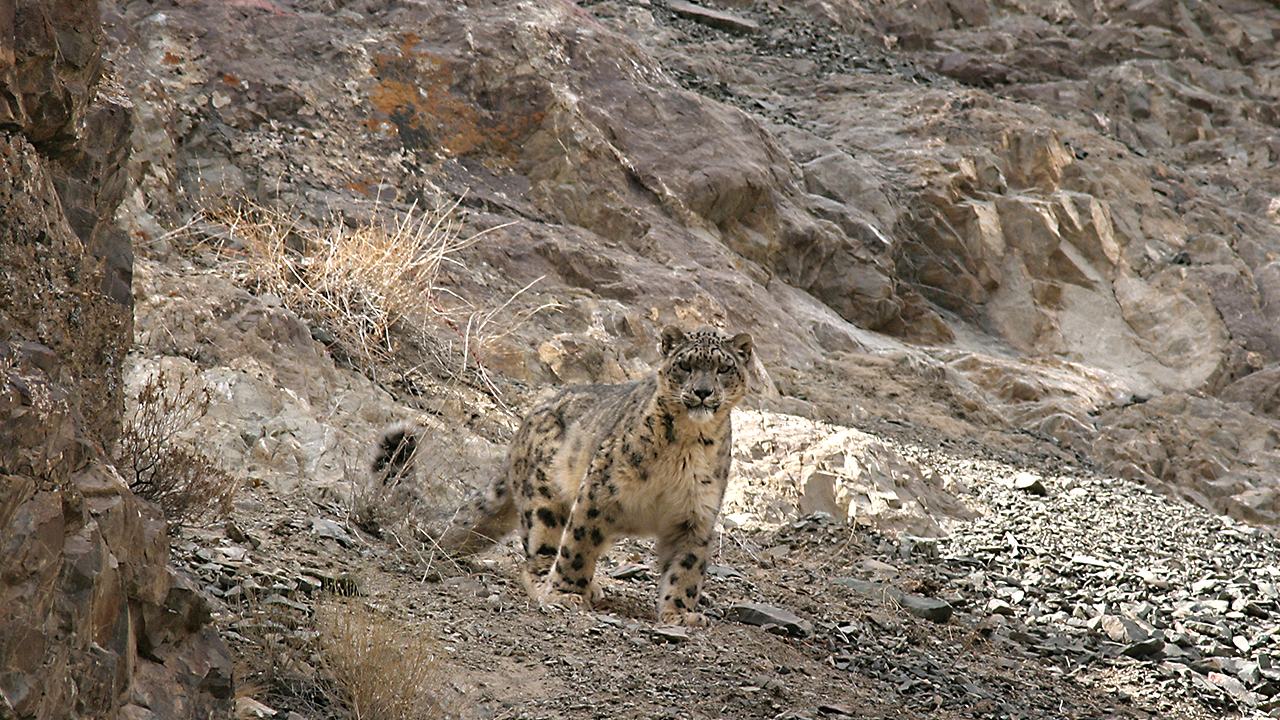 Since very little was known even on its natural history, Raghu focussed on movement patterns, habitat preferences and food habits. He followed tracks: every time he picked up a fresh snow leopard track, he would follow it for as long as he could—sometimes 11 or 12 kilometres over several days. “It was the best thing that happened to me—following snow leopard tracks was like reading a book on snow leopard natural history. I characterised the habitat every few hundred metres to quantify the observations. It was fantastic, I don’t think I could have learned more by following the radio-collared snow leopard.  My data quantified that snow leopard used broken terrain and upper slopes but it was the natural history understanding that helped me understand why they used these areas more often."

Raghu found that the snow leopard is unique among the large wild cats: “it is a gutsy and smart predator that regularly kills prey larger than its size—frequently even prey that is almost twice its size. All other large cats, like tiger, leopard or jaguar, follow the established optimal foraging strategy. Snow leopard is an exception. According to this theory it is most rewarding for a predator if its main prey are smaller or the same size as the predator itself. The snow leopard’s principal wild prey consists of blue sheep, ibex, argali and markhor.  In relative terms, the female snow leopard is a fairly small predator—27-55 kg—in comparison to its sympatric wild prey—45-180 kg. Males of these prey can be three to four times larger.” 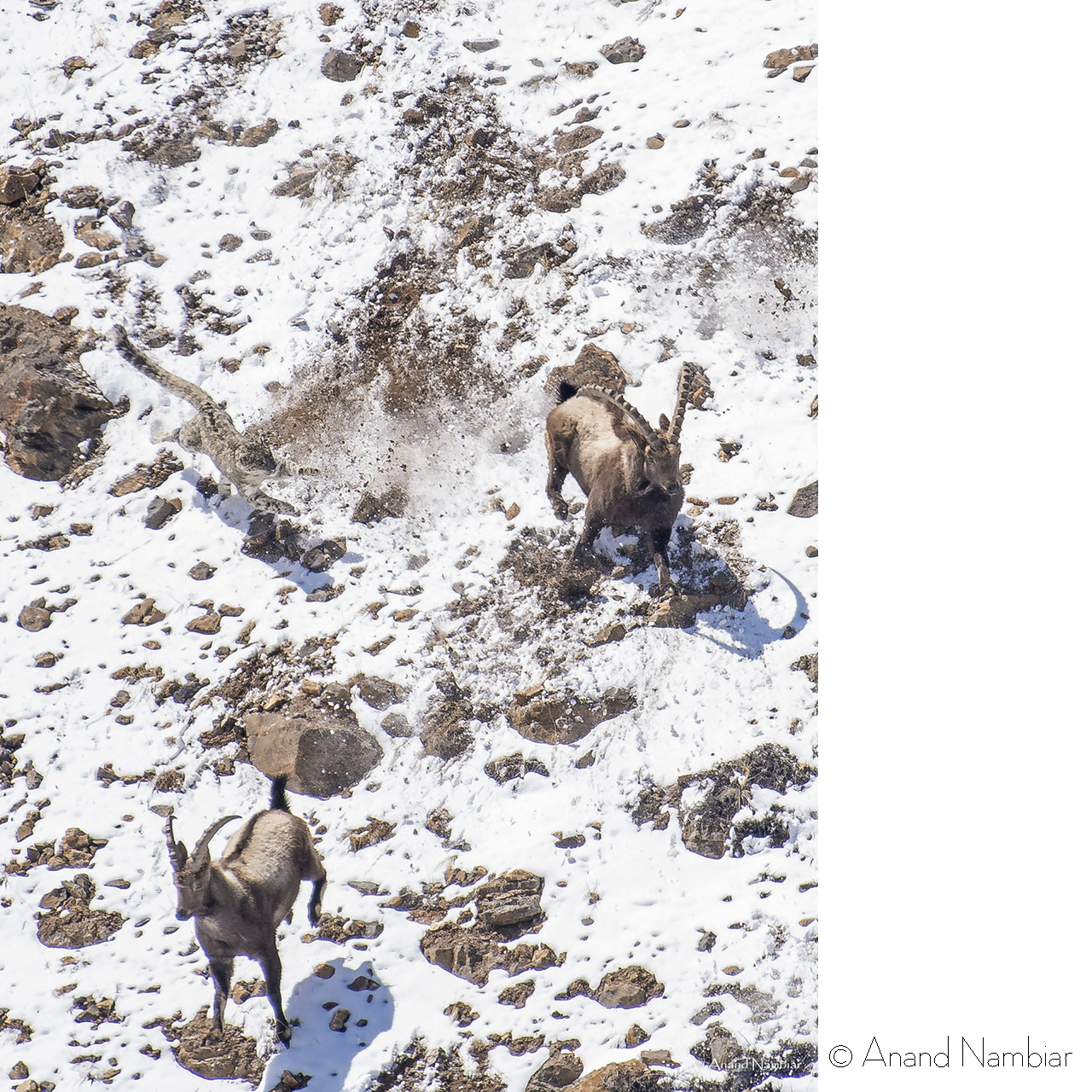 This is one of the unique factors about snow leopard; its natural prey choice is an expensive reward with high risk. We see this in the several snow leopards chases and dramatic falls with its prey involving extreme hazard. The years following snow leopard on foot on these slopes helped Raghu understand why they spend most of their time on the upper slopes and why it chases its prey down slopes despite the fact that it gives its prey extra benefit to escape faster. “The snow leopard is a truly smart predator; it knows the only way it can bring down prey twice its size is with the help of gravity and the momentum generated from the chase. It uses it very effectively but still takes an extreme risk. Imagine a female snow leopard trying to pull down a large ibex on flat ground! We have seen a tiger’s struggle when pulling down male sambar or a male blue bull and also seen how often these large preys can escape their deathly grip.” 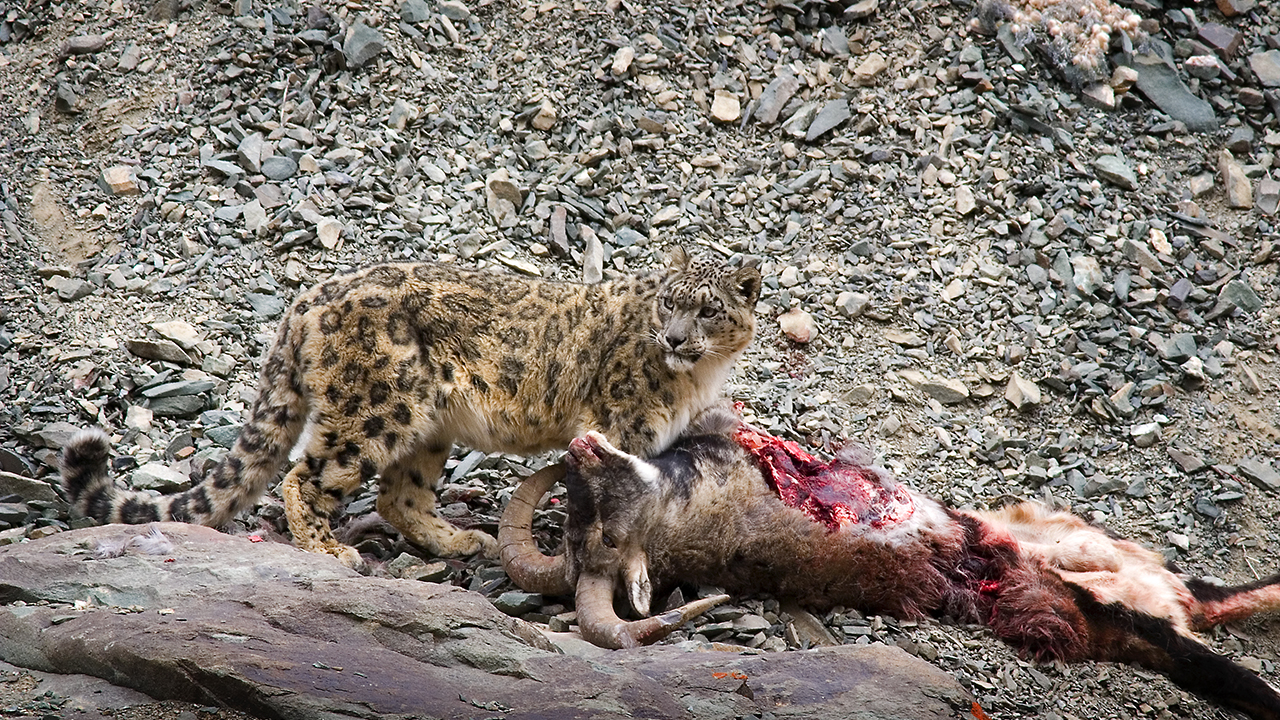 We do not have conclusive evidence to show whether or not livestock are a limiting factor to the wild prey.  But even if domestic livestock is a factor limiting wild prey density, snow leopard can still achieve high abundance. Maybe even higher than where there are no livestock. If domestic livestock is removed all of a sudden, as has happened in Rumbak, the question arises: what will happen to snow leopard abundance? Will it go down? And if the entire predation pressure shifts to wild prey that occur naturally in low abundance, will it affect prey demography and abundance? It will be very interesting to monitor the effect these sociological changes have on the ecology of snow leopard. We hope to go back next year and spend a summer there, to understand the changes that will be reshaping the ecology of Rumbak.