Art Patrons of The Sarai at Toria

The Sarai at Toria is the sum of many contributors.  When we were conceiving it, we had even thought to invite some of our artistic friends to individually design and decorate the interiors of our eight rooms; in each we would then hang a photo and small write up about the creator of the look. However this was one idea that remained only that, a lovely concept—in large part this was due to lack of time. In hindsight, now that we have the experience of running a small establishment, we realise the added problems and costs that could have engendered, so we are slightly relieved that it was never actuated!

A small nod in this direction though, may be seen, mingling with our wildlife photographs, in some of the lovely artwork that hangs in the bedrooms and library at the Sarai. Many of these are the wonderful creations of friends. Let me introduce you:

In the first room hang a couple of our tiger images—relaxed poses of our favourite Panna tigress and her cub. She appears as Sayani in the BBC Natural History documentary, Tigers of the Emerald Forest. 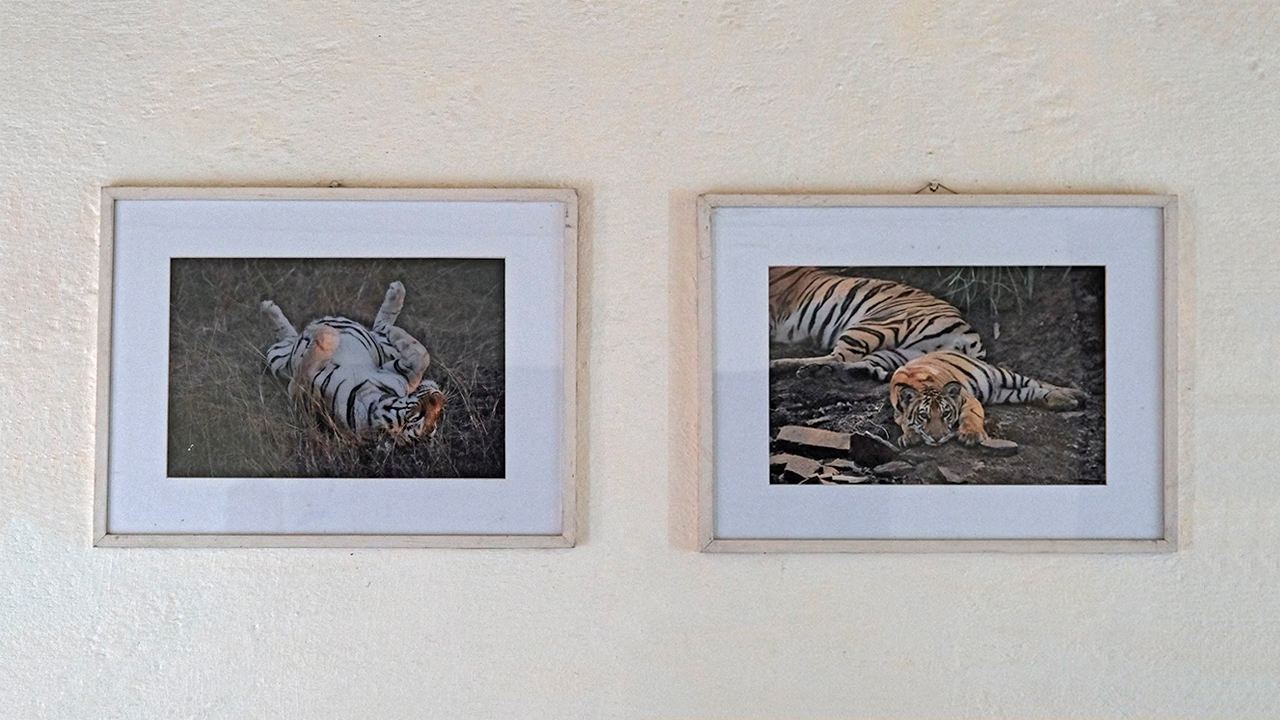 But the pièce de résistance in this room is a fabulous early work of Padmini Mongia. Padmini is a multi-talented academic, author of ‘Contemporary Postcolonial Theory: A Reader’ as well as a delightful children’s book, ‘Baby Looking Out: and Other Stories’.  However she is also a visual artist and enjoys working on handmade paper as well as on traditional canvas, experimenting with brushes not usually associated with paintings. Her first show was in 2005 and entitled “Shapes of Nature”. So you may understand how, apart from being a friend, her style and execution gelled with the architectural space and character, we hoped to create.  She has held several painting exhibitions since then, mostly in the USA but one was held in New Delhi shortly before the Sarai opened in 2010:  “Ink and Blue"— these were abstracts shown at Zaza Home in Zamrudpur.  There was a beautiful, sunny golden yellow canvas that won my heart and that I could immediately imagine adorning the raw umber mud walls of our first Sarai bedroom, setting the tone for the rest of the furnishings. And there indeed it found its home.  It is a stunning work, generously donated by the artist herself, and it gives us pleasure every time we enter the room. 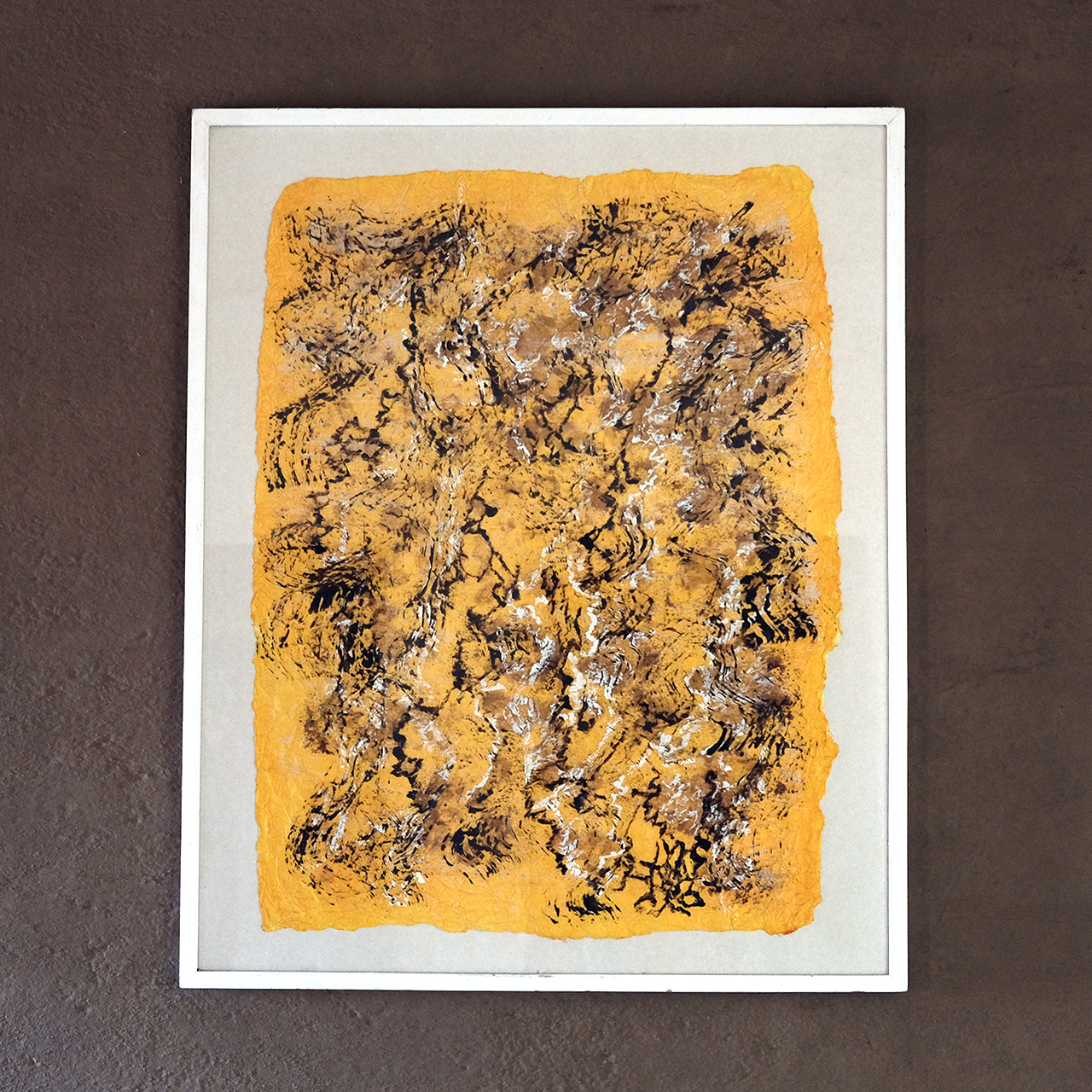 Carl d’Silva was a long time good friend but sadly he met an untimely death in 2015. Many ornithologists have learnt to identify birds in India thanks to his wonderful drawings in several of India’s bird books. He worked with the Bombay Natural History Society and Dr Salim Ali and indeed in 2002 when the new edition of Salim Ali’s Book of Indian Birds was brought out on his birth centenary, he re-did all the illustrations for it. He is acclaimed as India’s leading wildlife artist: the only Indian wildlife artist to be called five years in a row to contribute to the UK Society of Willdife Artists’s exhibition in the prestigious Mall Galleries in London.  Born in Goa, he was a humble and warm human being with a great sense of humour and complete dedication to his art.  His talents were eclectic as we saw in his creation of the wildlife props created for the cult film Electric Moon, Pradip Krishen and Arundhati Roy’s wonderful parody of former royalty selling wildlife vacations to westerners. Carl’s beautiful owl from this still looks down from Arundhati’s bookshelf. I had seen the beautiful glass etchings on windows at his Goan home and dreamt that each of our large Sarai bathroom windows would feature a Carl d’Silva etching; a different grass scene after which the eight cottages would be named. Sadly this was never to be. But a sentimentally precious selection of his small bird illustrations do adorn one of our cottage walls. 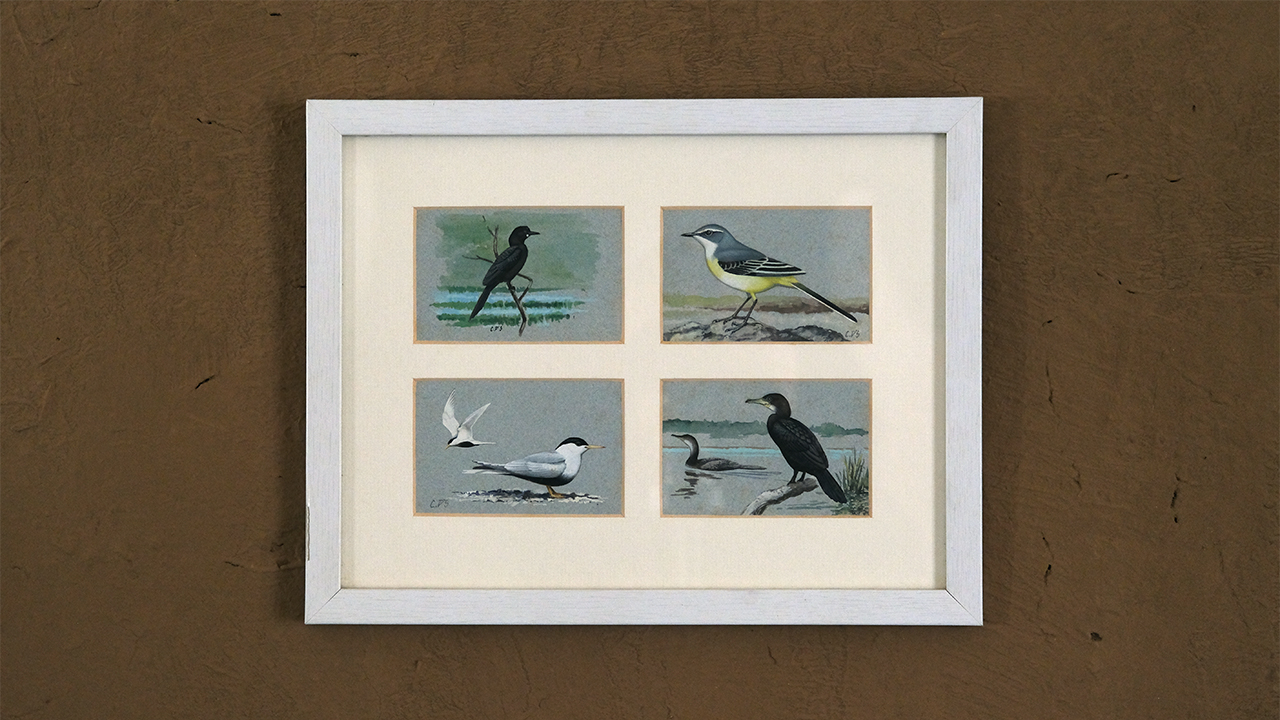 Several of our rooms are enhanced by the drawings of another long time friend, Golak Khandual. You will recognise his name from our blog on building the Sarai since he was a key founder element, for more than only his architectural skills. He is primarily an artist but is also architect, cook, writer, photographer, film set construction manager, make-up artist and more—certainly a good candidate for the epithet, “Renaissance man”.  His drawings have a special quality—charcoal, conté or ink, right hand, left or foot, created in the light or dark, they mesmerise and transport you to an imaginary world or engender new thoughts in the unique presentation of characters and social situations from everyday life. For Golak art is meditation in action and the results transport us to deep thought too, often whimsically and delightfully. 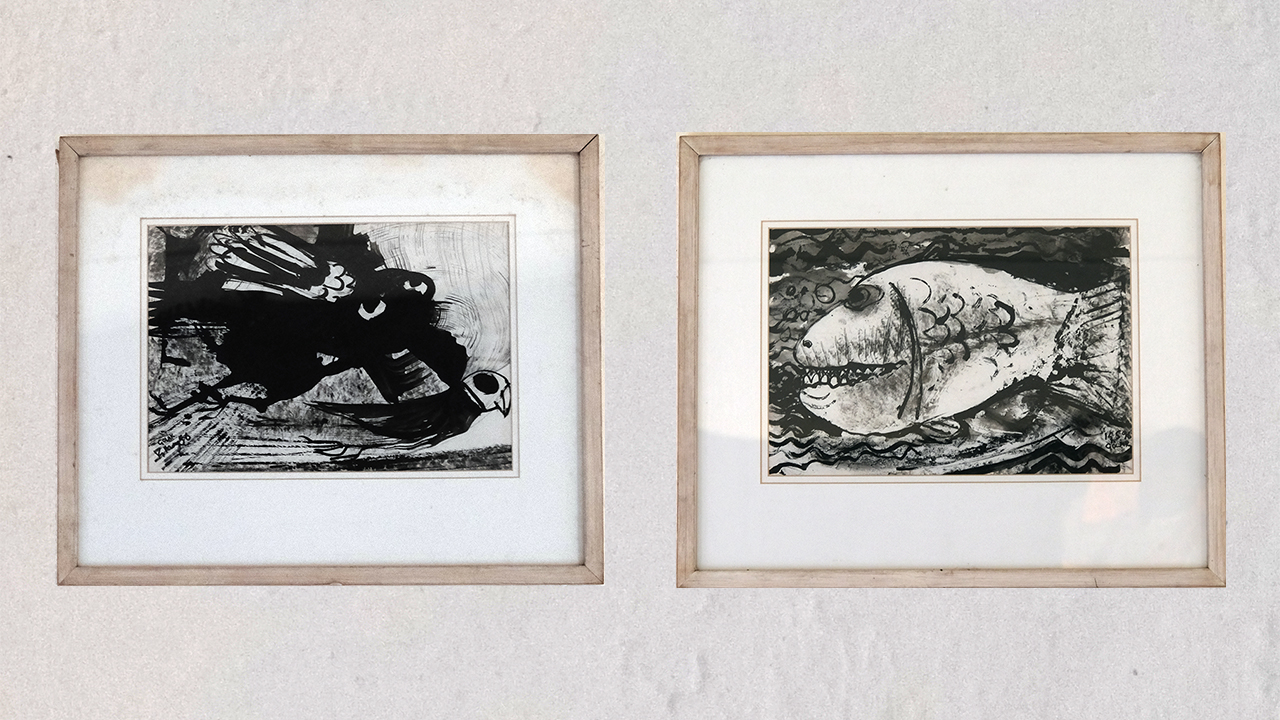 Shouma Banerjee is another artist who conveys you to other realms but from ones that are rooted in social realities.  The works hanging at the Sarai are reproductions of the originals that hang in our home in Delhi. Their inspiration was the Narmada Bachao Andolan movement—the largest, most peaceful (and heart-rending) social movement of the world. Tribals, farmers, environmentalists, human rights activists led a very widely supported protest against the destruction of the sacred and remarkable Narmada river through the building of a series of large dams and against the enormous social upheaval this was going to entail. Shouma’s works are a poignant and beautiful reminder of this historic moment, but they are equally appropriate for captivating those staying on the banks of our lovely Ken river. 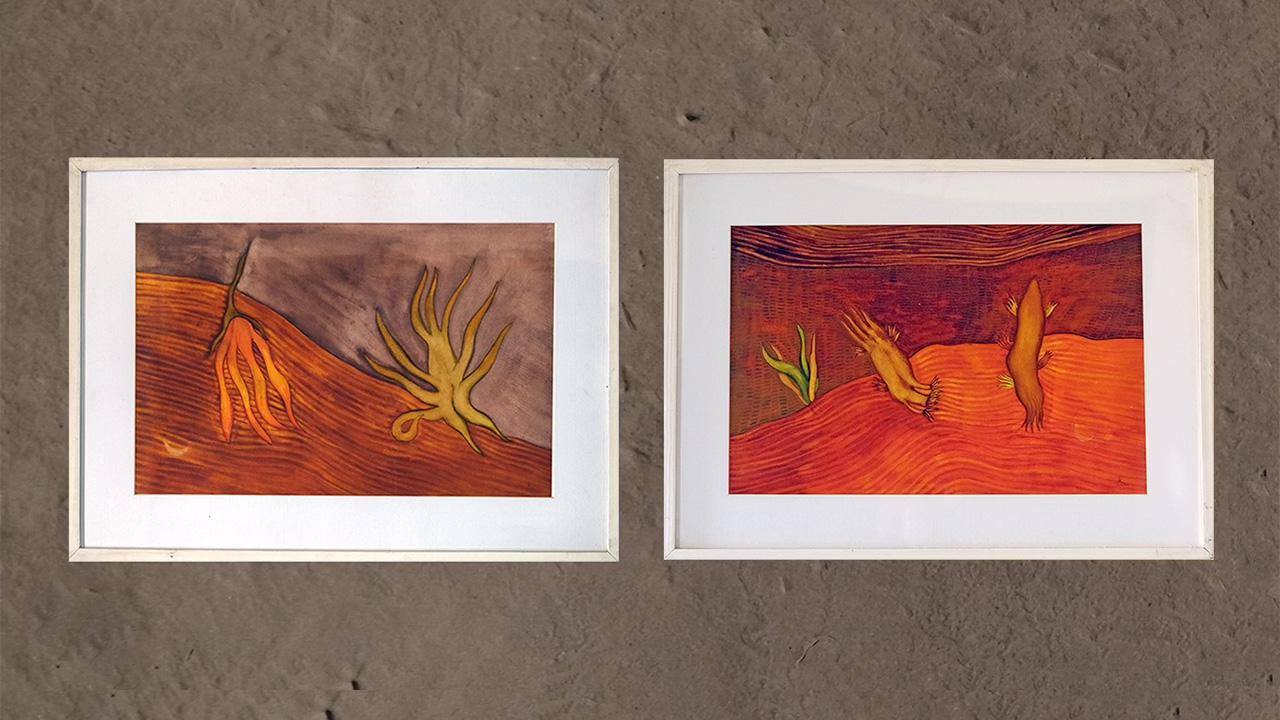 In our blue room hang three posters, tributes to the diversity and wonder of Ladakh’s high altitude desert landscape and denizens.  These were designed by Akshay Singh Rathore. Akshay is Raghu’s nephew and he was a key element of the Sarai at Toria since it was through him that we were introduced to Mickey Bardava, our incredibly talented brand designer. They had met at the National Institute of Design in Ahmedabad where Akshay was trained in animation; he has gone on to become an installation artist with wonderful works that build on his agricultural background and his care and concern for the environment. Between, he collaborated with us to design these posters for the Wildlife Department of Ladakh in Jammu and Kashmir. Their richness helps spread awareness and understanding of its wildlife to inhabitants and visitors of this mountainous area of India.

Bas Evans is one of the world’s most acclaimed wildlife and nature artists. We had the pleasure of meeting him in the 1990s when he visited Panna Tiger Reserve during the time of Raghu’s tiger research project.  He was a wonderfully gentle character, a Welsh ex rugby player, with an original eye for colour and a desire for his work to further environmental concerns. Sadly he was not lucky with tiger sightings but the background landscape of his Panna painting was his personal vision while the tiger cameo reflected an image I had captured of the courtship of one of the study tigresses by a young male. In our dining area hangs a, now slightly faded but still stunning, Giclée print on canvas of  ‘Promise of India’, his fabulous oil painting. Another generous artist donation! 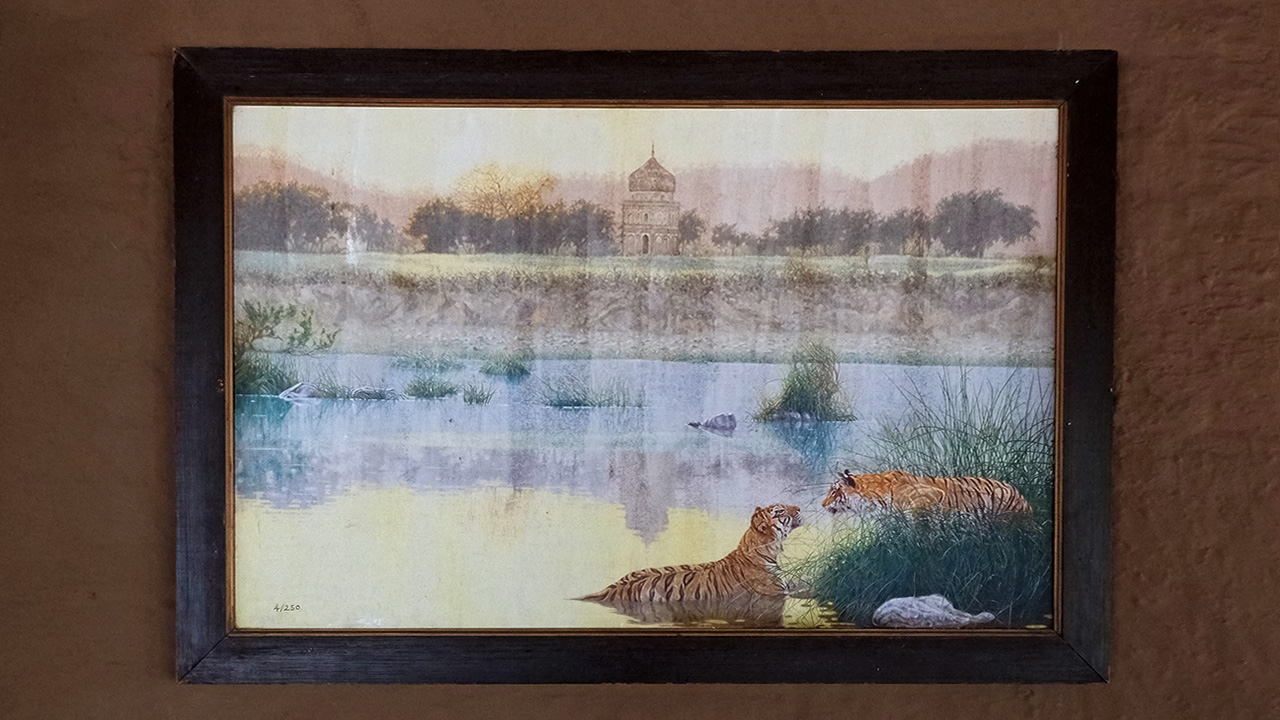 A more recent present from an artist hangs in the Sarai library. This is by a new friend, another NID graduate, Kapil Sharma. Kapil has an incredible and enviable pedigree: he is a sixth generation artist from a lineage of miniature painters from Nathwara in Rajasthan. Each generation has built on their heritage and developed it further to wonderful effect. Being a child of the computer and digital age, Kapil incorporates modern technology and blends it perfectly with his pichvai ancestry to produce some stunning work. We feel most honoured to have one hanging at the Sarai and its beauty and depth took it to a favourite position very quickly. 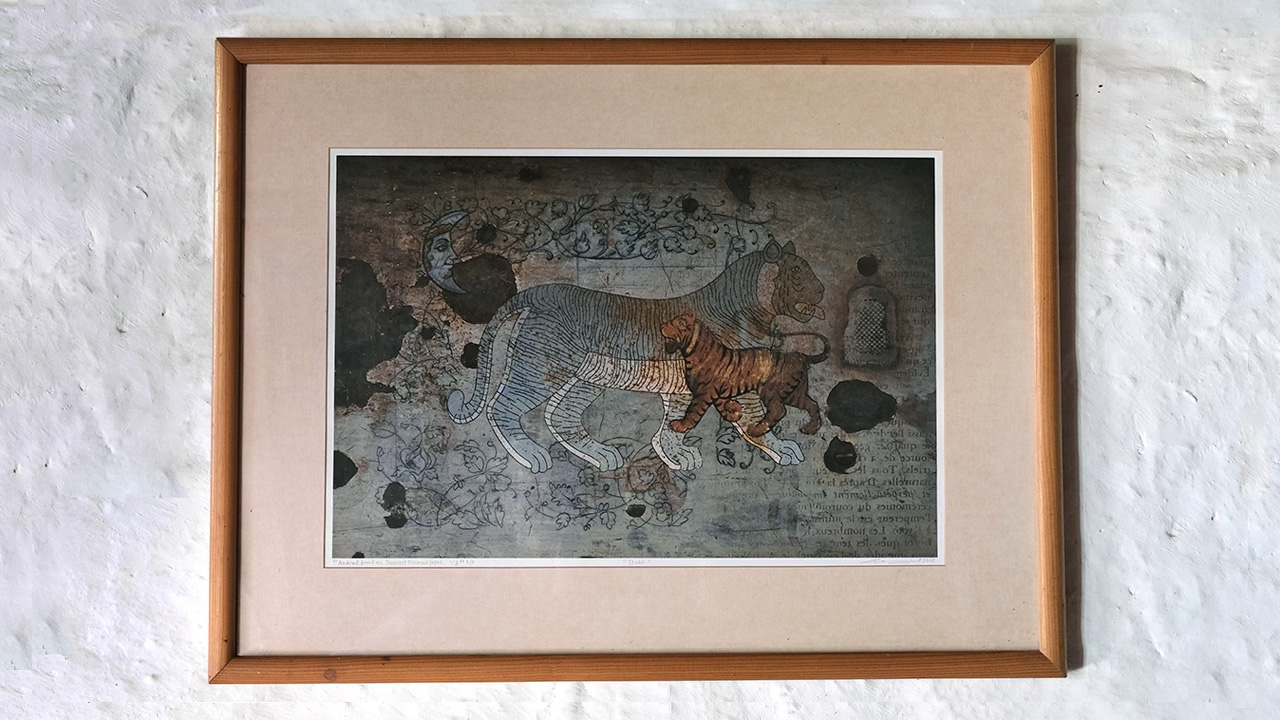 We would love you to visit to see the full selection— other works are equally captivating, from large Warli fishing scenes and Gond animal stories to delicately drawn 19th century animal prints, ethereal little Sanjhi art cut-outs and a map of the Sarai drawn by a young Japanese visitor, Yuya Numata. This has also become a treasured possession. Yuya was only 12 when he and his family stayed with us in 2013. He had asked whether we had a map of the Sarai and when we replied in the negative had taken a sheet of our writing paper and drawn one for us. He created this fairly early on in his stay here and his observation astounded us—it delightfully depicts our boats, bridge, water tank, swing, kitchen garden and all, perfectly positioned. 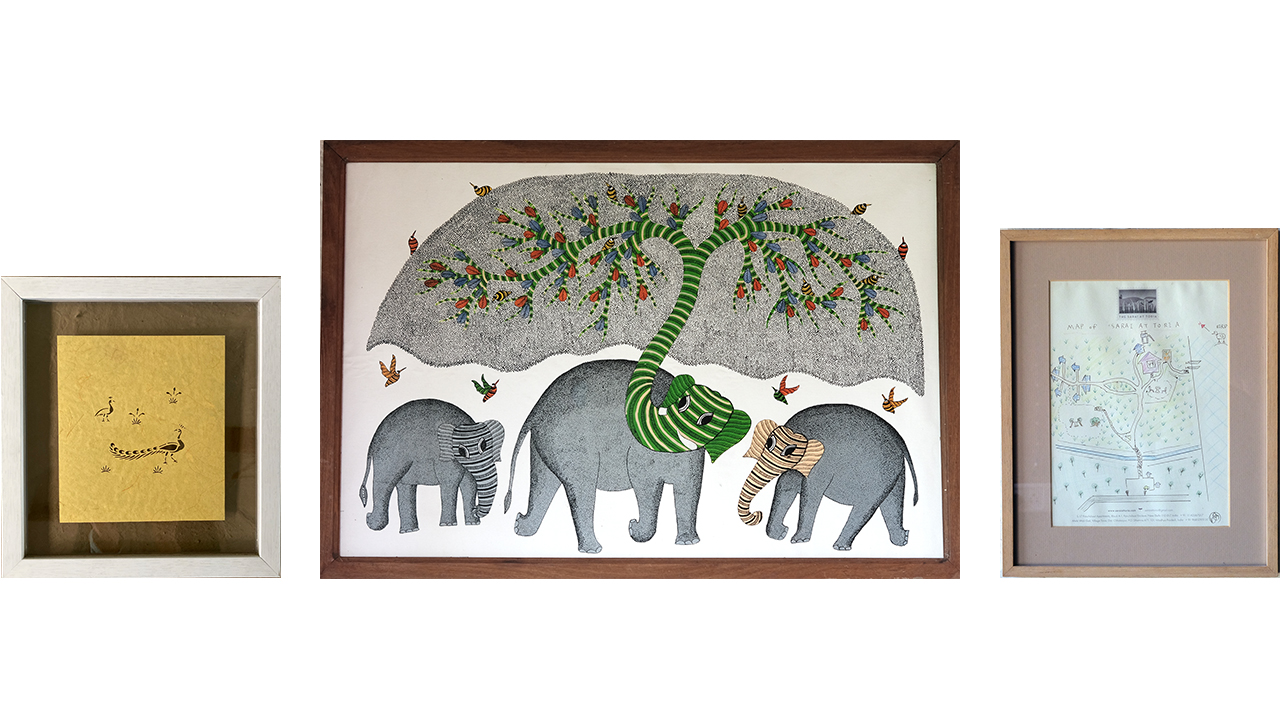