The Making of The Sarai. Part 1

We first began seriously considering creating a small hotel on our land near the Panna Tiger Reserve in early 2008.  Raghu’s connection to the area went back to 1995 when he began his tiger research project there. We had imagined an on-going, long-term if not indefinite, study that would include working with the community on conservation issues. With this in mind we had bought a small patch of uncultivated farmland on the banks of the Ken river.  However this was not to be; the research work came to an unanticipated and abrupt end in October 2005. Studies in Protected Areas are dependent on the goodwill and permission of the Forest Department and as the whistle-blower to the extinction of tigers in Panna, Raghu became a pariah in the eyes of the forest bureaucracy. (The full story can be read in his book The Rise and Fall of the Emerald Tigers – 10 years of research in the Panna Tiger Reserve published by Speaking Tiger) 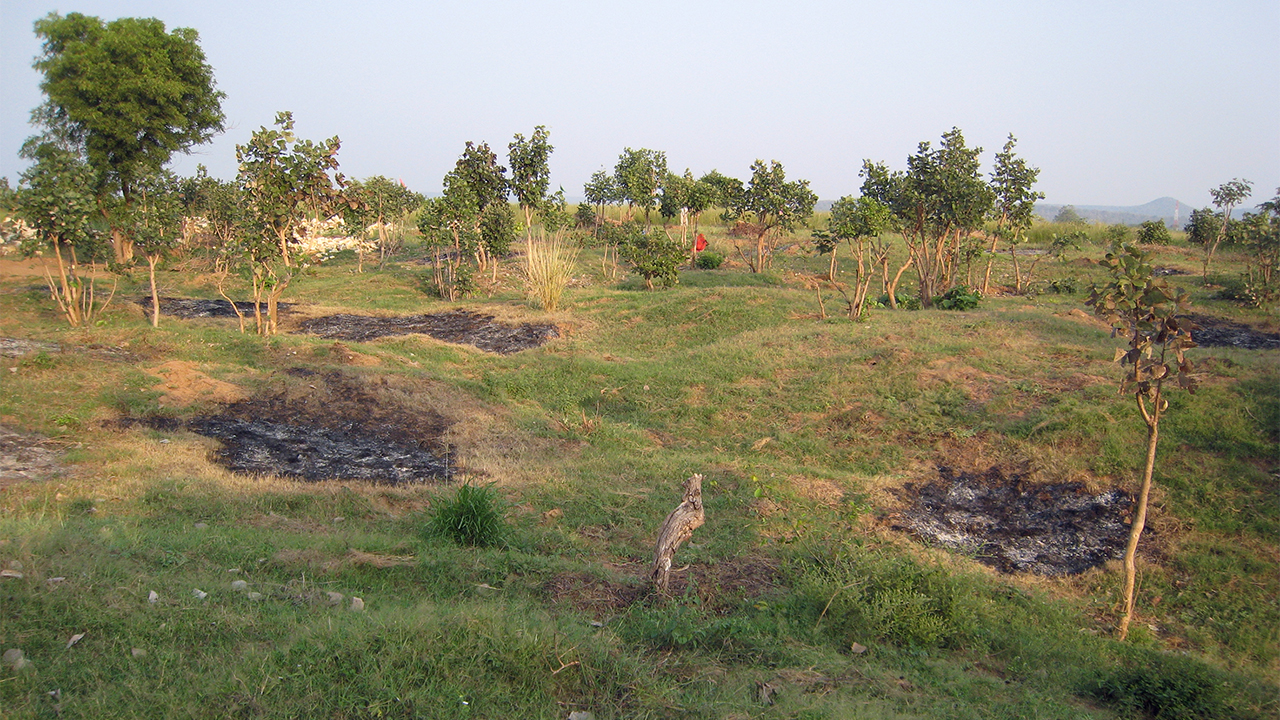 Three years being based in Delhi had us plotting for ways to return to Madhya Pradesh to continue conservation work there; so was born the idea of building and running a small eco-property.  It was not to be a wildlife lodge; we had no wish to compete with our good friends across the river and more to the point (to mix metaphors!) having been bitten once by the Forest Department, we had no desire to lay all our eggs in that basket again!  But the wonderful UNESCO World Heritage site of Khajuraho was next door and while full of hotels, to our minds had no accommodation really appropriate to the area. Besides as a tourist destination it was a one, or at most two, night stay and we knew there was so much more in the surrounding area that could and should attract visitors.

Both of us came from wildlife/environment backgrounds so there was no question but that we wished to create a project with as low a carbon footprint as possible. M.P. has an extreme climate: from frosts in winter to more than 45’C (113’F) in summer.  We looked to the vernacular architecture for the most appropriate way to build for this.  Mud was the obvious answer. Our site was so beautiful and we wanted our guests to enjoy nature to the full so we decided to keep an open sitting dining area and position it at the highest point, with the best views. 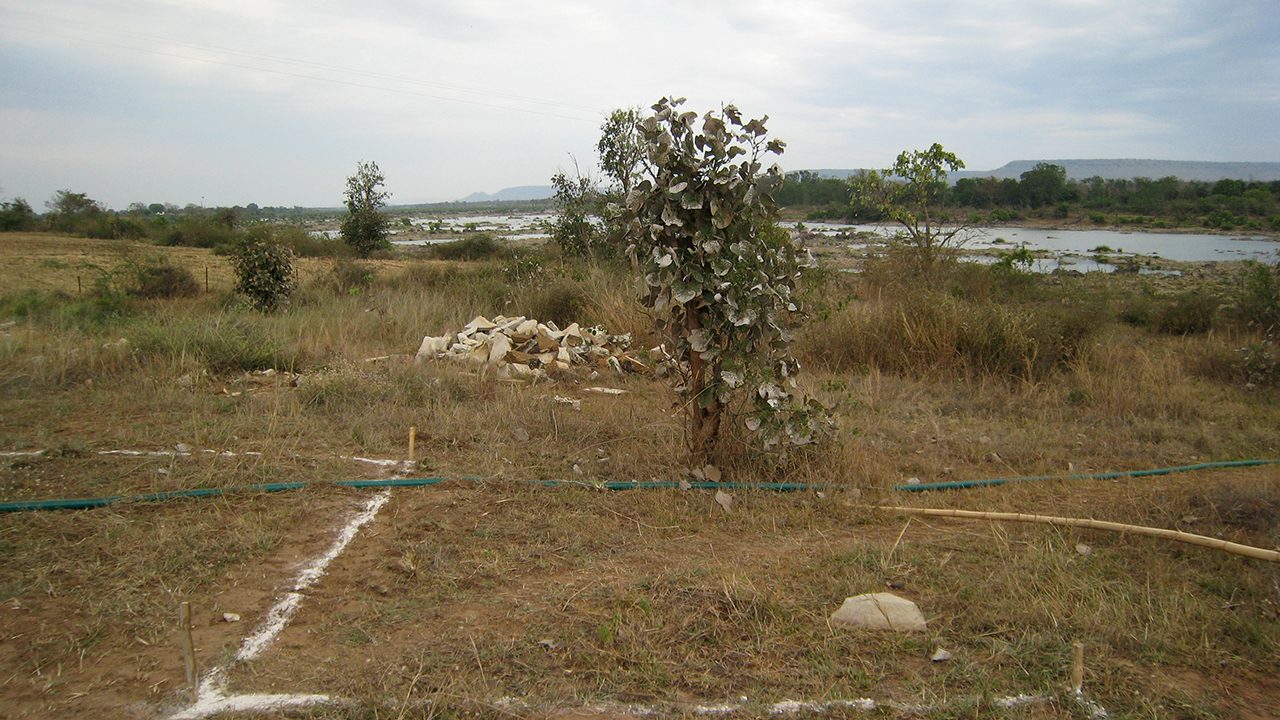 Marking out the Baithak

We were very fortunate in having the assistance and creative inputs of not one but three architects. Our good friend Golak Khandual, artist and sometime reluctant architect, was our big support and a major contributor throughout. He brought on board two friends, Sibanand Bhol a young and enthusiastic architect graduate who got us started and gave our ideas form, and Eugene Pandala, a renowned mud architect from Kerala, who gave it final shape. Golak also introduced us to Biru who oversaw the construction. We could not have been more fortunate to have such a fantastic like-minded team.  Apart from wanting low carbon footprint buildings, our other brief to them was that we wanted to create an environment in which our neighbours from the local community would feel comfortable not alienated and not over-awed. The Sarai evolved throughout its formation and the end result is a wonderful amalgamation of the creative thoughts of three architects, the abilities and traditional building knowledge of the local labour team, inputs from friends and our personal, if in-expert, ideas of how a comfortable eco hotel should be. 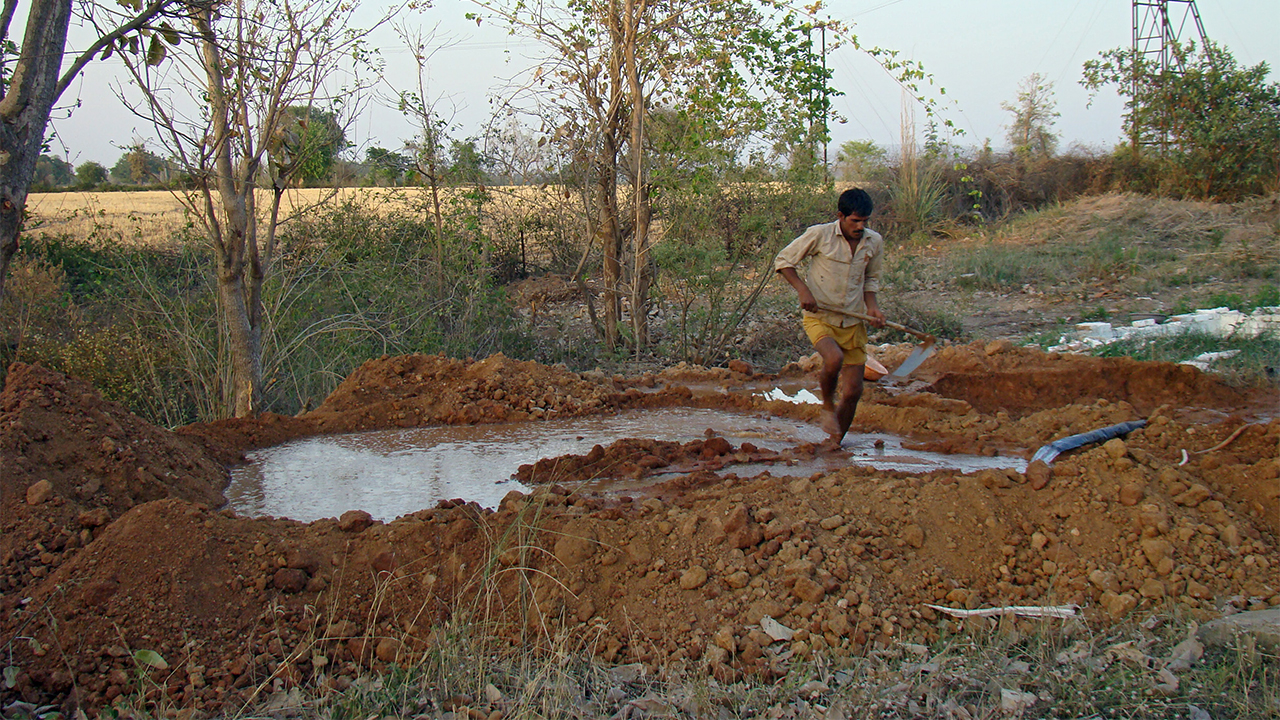 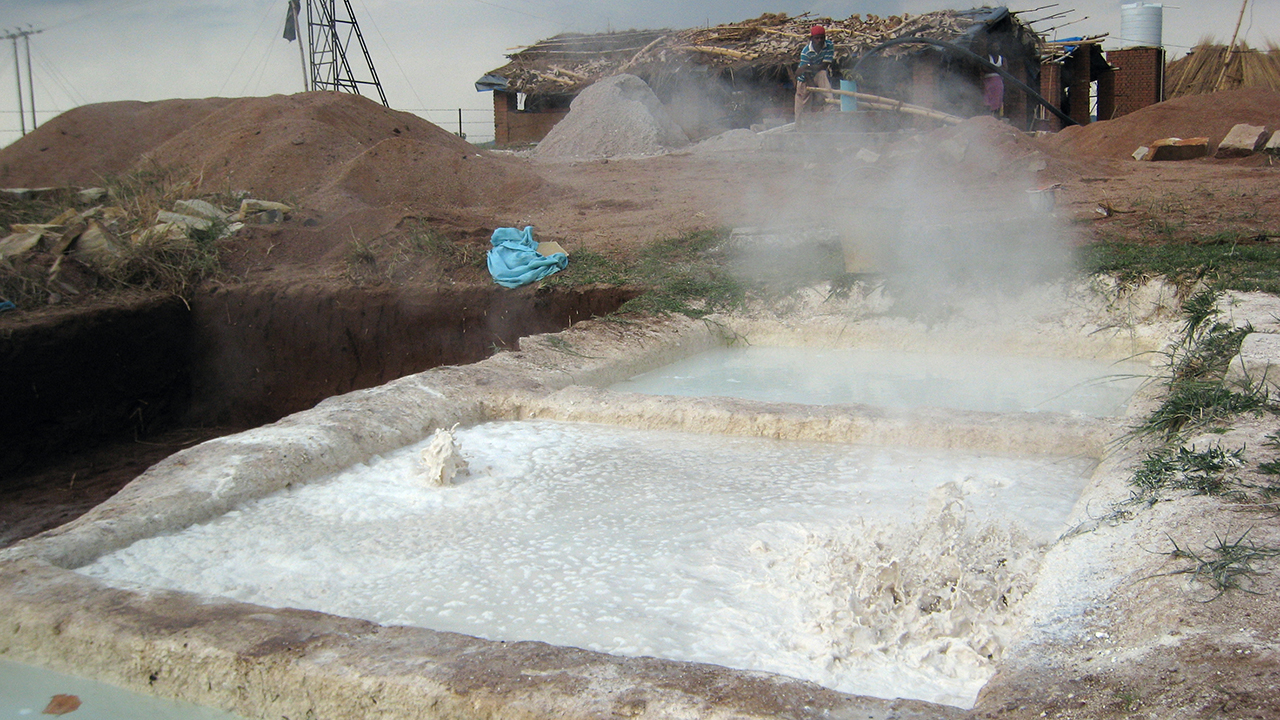 Preparing the mud and the lime

Our 8 acre site was not accessible by road and indeed even by foot there was a quite deep nallah (watercourse) between the nearest road track and where the hotel was to be. There was a convenient tree that served as a bridge for pedestrians but bringing cartloads of building material needed a different approach. This was solved by leasing the edge of our neighbour’s field, which both bordered the road and allowed less steep access to the nallah. We were able to create a temporary bridge across the waterway just wide enough to take a tractor and cart. 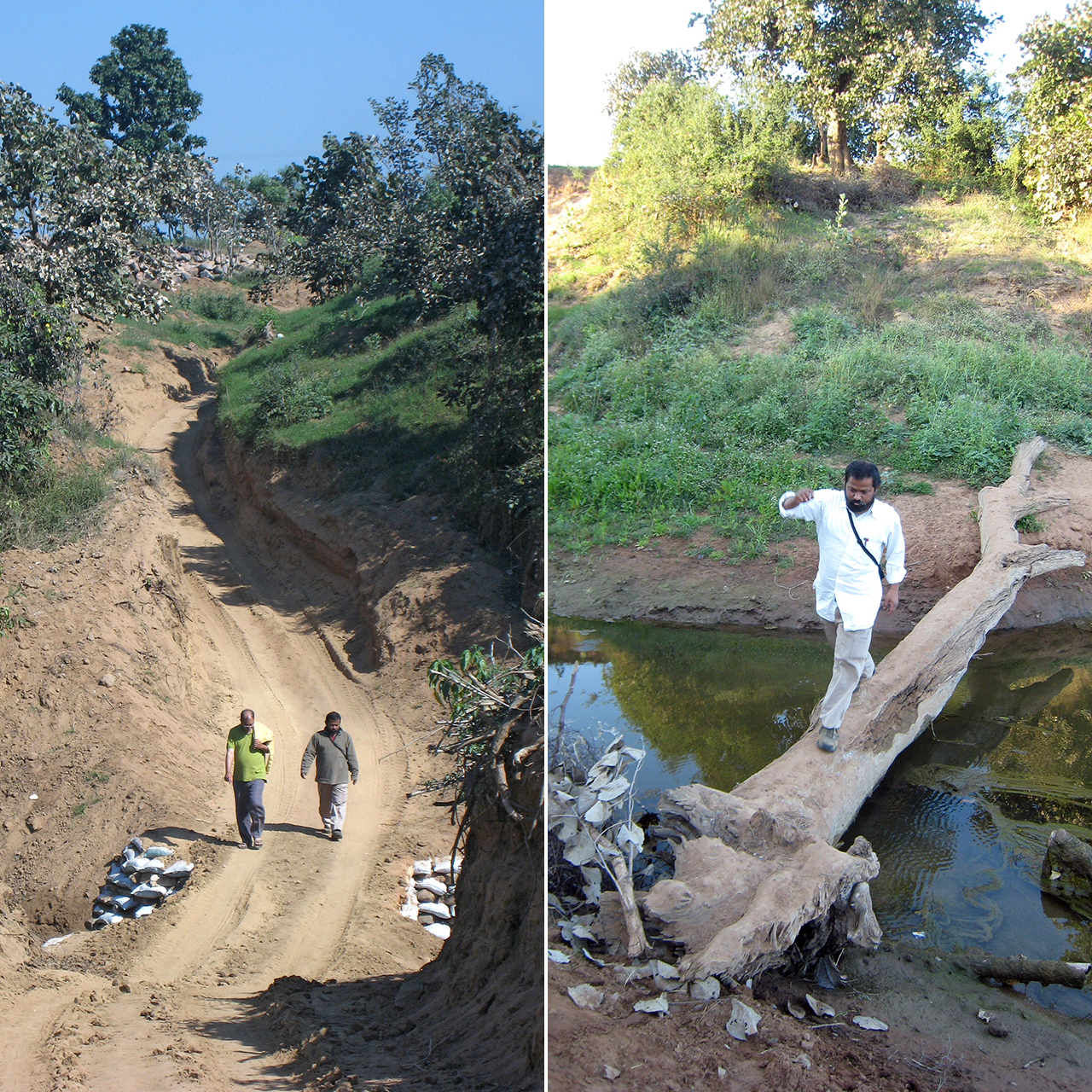 Early bridges to the property

Being a riverine location, the soil on site was not appropriate for building so mud came by the cartload from nearby fields and our building stone from close by quarries. Indeed most of our materials came from within a 80kms (50 miles) radius.  We mostly avoided using forest timbers due to uncertainty of legal felling so the wood we used is an amalgam of less used cultivated species: so no teak, but neem, babul, mango, siris and shisham.  When we ran out of stone for doorways, we did use some sal, Shorea robusta, a forest timber, since this is high termite area and sal is one of the few termite-proof woods. But mostly we used stone for the window and door frames. This stone came from a little further afield since no one made these locally.   We travelled to Rajasthan and indeed found ourselves travelling quite far since it was our bad luck that this search for stone chaukhats (door frames) coincided with the then Chief Minister of Uttar Pradesh’s drive to cover her state with stone statues of herself, her heroes and her party symbol, the elephant. Every quarry was working overtime to cut and produce stone for her so it took us quite some time to find one that could supply our – relatively small – order! Sadly no chance to be picky with the colour! 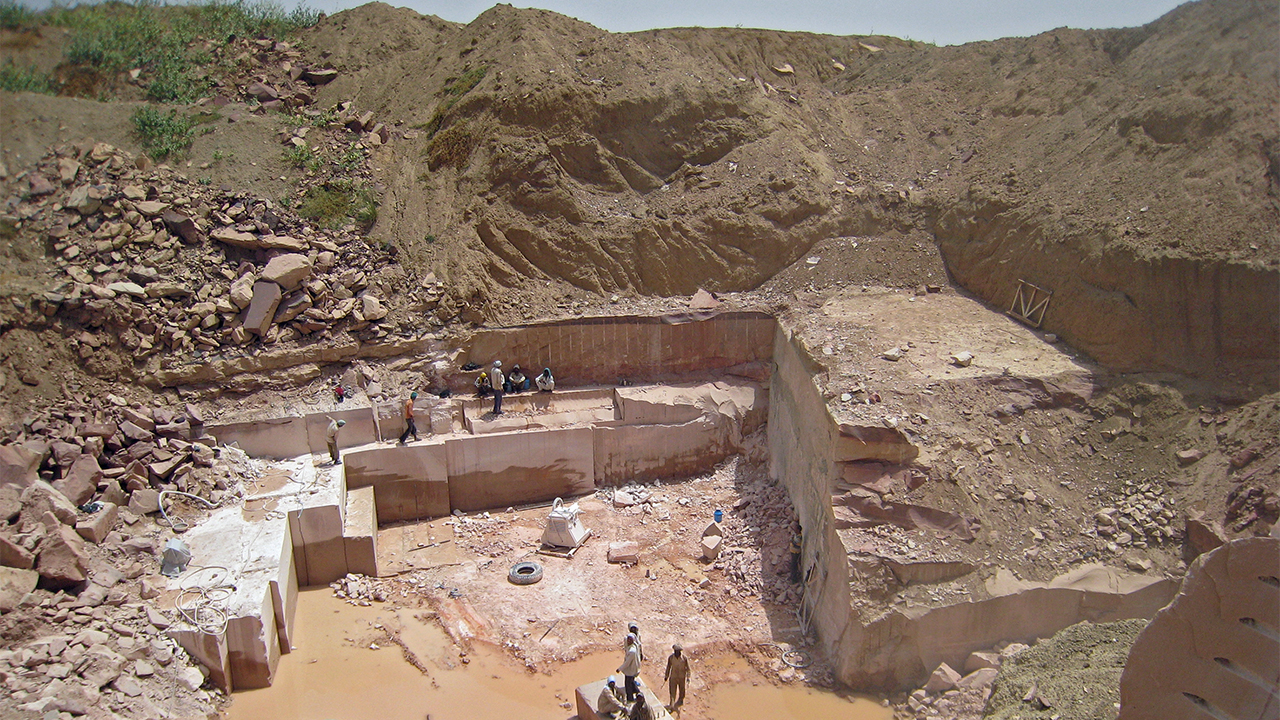 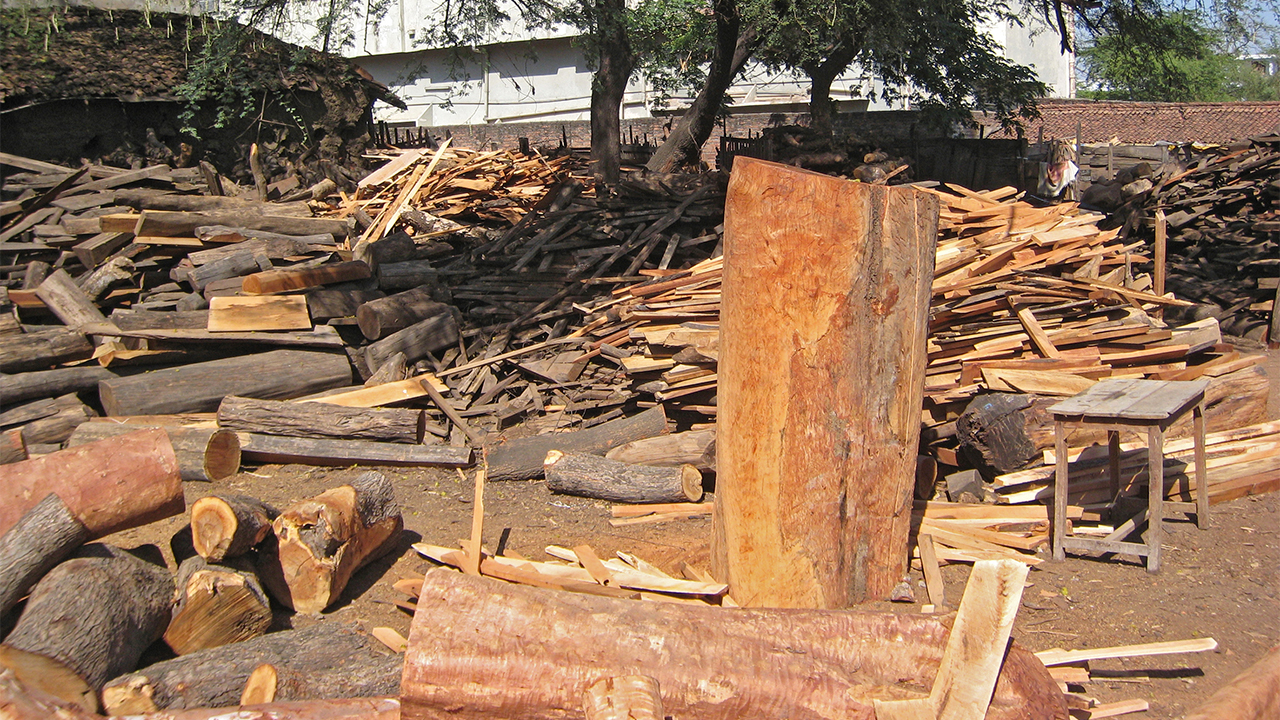 Choosing the stone and the timber.

We wanted to avoid cement as much as possible so lime was our choice of mortar, used with the stone in the Baithak and with bricks for the kitchen.  Our first four cottages are actually also not fully mud walled. You cannot construct a full wall all in one go; this needs to be done one foot at a time, with a drying period between one layer and the next.  We had built to the nine-foot level and were awaiting the roof design in order to finish the upper shaping. However monsoon was around the corner and by the time we had the design in hand we reckoned there may not be enough time for mud before the rain started.  So we went for a faster finish of brick and lime.  After this came a bamboo frame and corrugated iron to creature-seal and waterproof the roof; above this was the cooling thatch.  This design too we changed for the next four cottages, built later. Some guests were disturbed by the noise of creatures running up and down the tin under the thatch, so we used eucalyptus beams and a thin layer of in situ ferrocement under the thatch instead. The patter of little feet on this is inaudible! 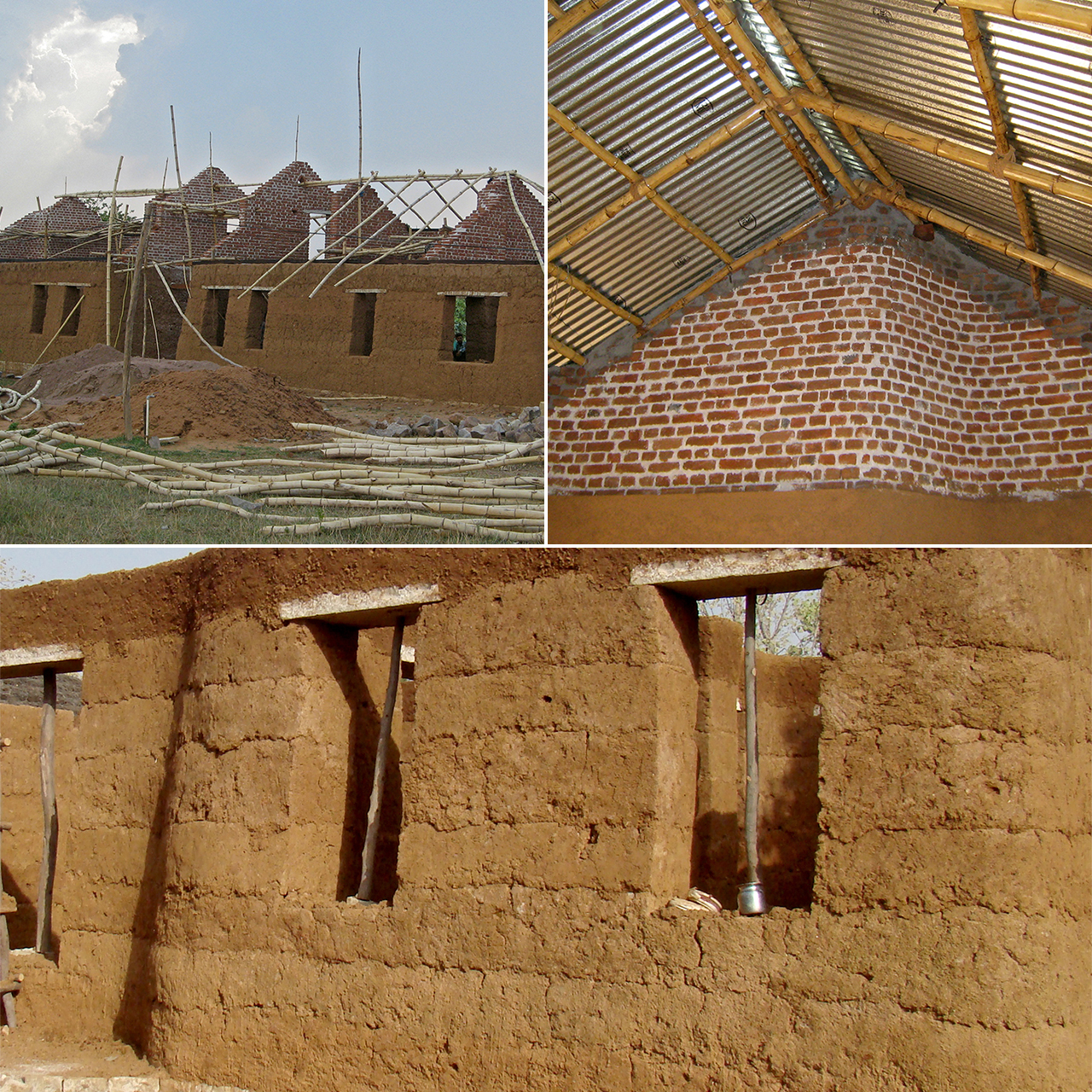 Our service buildings and Baithak are roofed with hand made tiles. A bit of a risk in monkey country but these constructions were away from trees so we hoped to be, and indeed more or less succeeded in being, able to keep their tile breaking antics at a distance. Tiles provide a wonderfully breathable roof that allows us to have fires inside without being smoked out. It just rises up and finds its way happily though the baked clay shapes - great in our winter months. We find that all these natural materials require very little maintenance and indeed provide a healthy and comfortable environment throughout most of our season with no need for electricity-hungry air-conditioners. 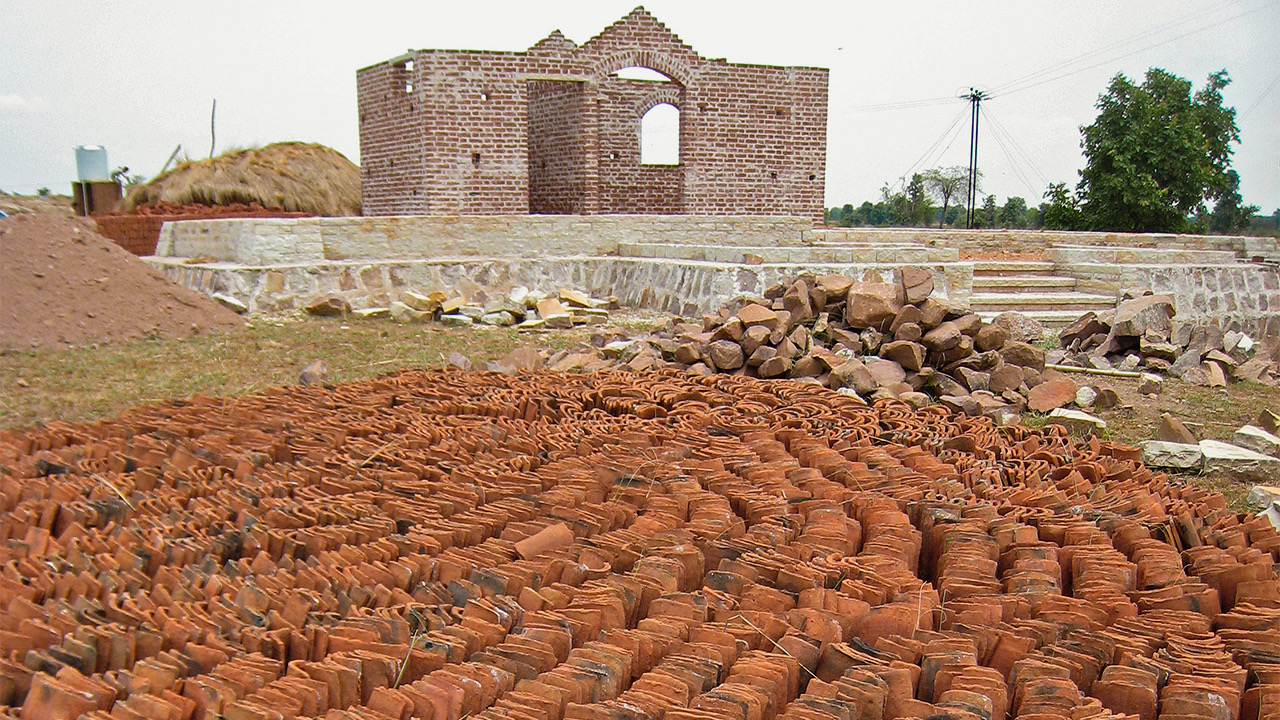 Handmade tiles for the Baithak horizontal