From the first day that the Sarai at Toria Project was envisaged, we had in mind our own small pastry kitchen. Rural India does not provide any decent bread and few pastries. Raghu knew very little about baking and though some friends referred to her as ‘puddingwali memsahib’, Joanna is the first to admit that her repertoire is in truth fairly modest. So we needed a baker. We were most fortunate to find Rakesh Singh in our immediate neighbourhood. Chef Manish Singh introduced us to Rakesh and recommended him for his commitment and experience and most importantly, for his ability to work without fancy kitchen equipment.

Although he had lived and worked in Khajuraho for 16 years, he is from a small village in Bihar. We wondered how he had journeyed from a humble village background to learning the art of baking. He told us his story: after several failed attempts to start his own business, his uncle offered to help and invited him to his place of work which was a five star hotel in Patna. His uncle took him on a tour to see which department he might prefer to work in but Rakesh was so overwhelmed by the five-star ambience that he could not decide.  But then his uncle took him to the pastry kitchen. The Chef offered Rakesh one of his preparations. Rakesh loved sweets and loved the dessert he was offered so that little bit of sweetness changed his life. 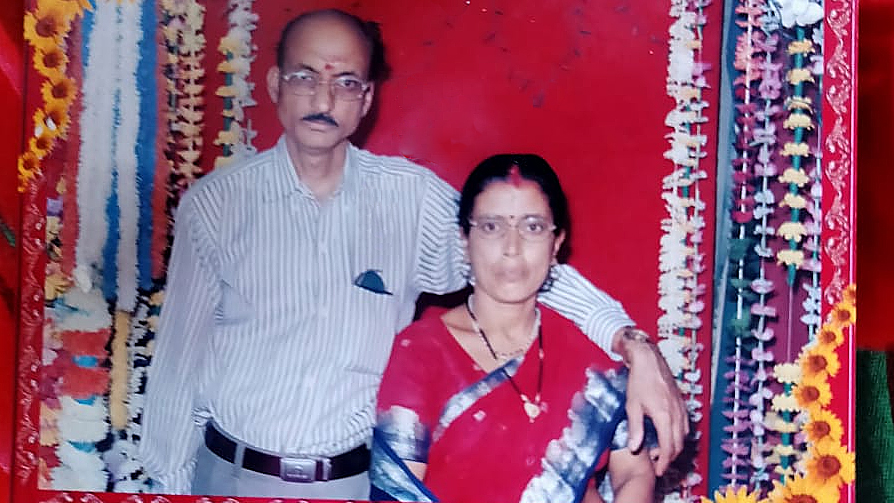 Rakesh with his lovely wife Madhubala, who sadly passed away a few years back. She is much missed at the Sarai at Toria

He joined the Sarai at Toria at its beginning and is the man behind the Sarai’s sweetness and growing reputation for great deserts. We were very excited when he joined, but did discover some unexpected challenges! The first was having to scale him down. He was coming to us from a kitchen where he made around 30 loaves of bread a day, to our eight-roomed property where, at the beginning, we needed less than three loaves a week! Downscaling was relatively simple, less easy was weening him away from the artificial flavourings and hotel short cut techniques he had acquired that did not match our taste and home cooking style. We were worried that he might be upset if we corrected him on this too often and that then he may not want to stay with us long. A solution was to introduce new recipes for him to learn from scratch using home methods. 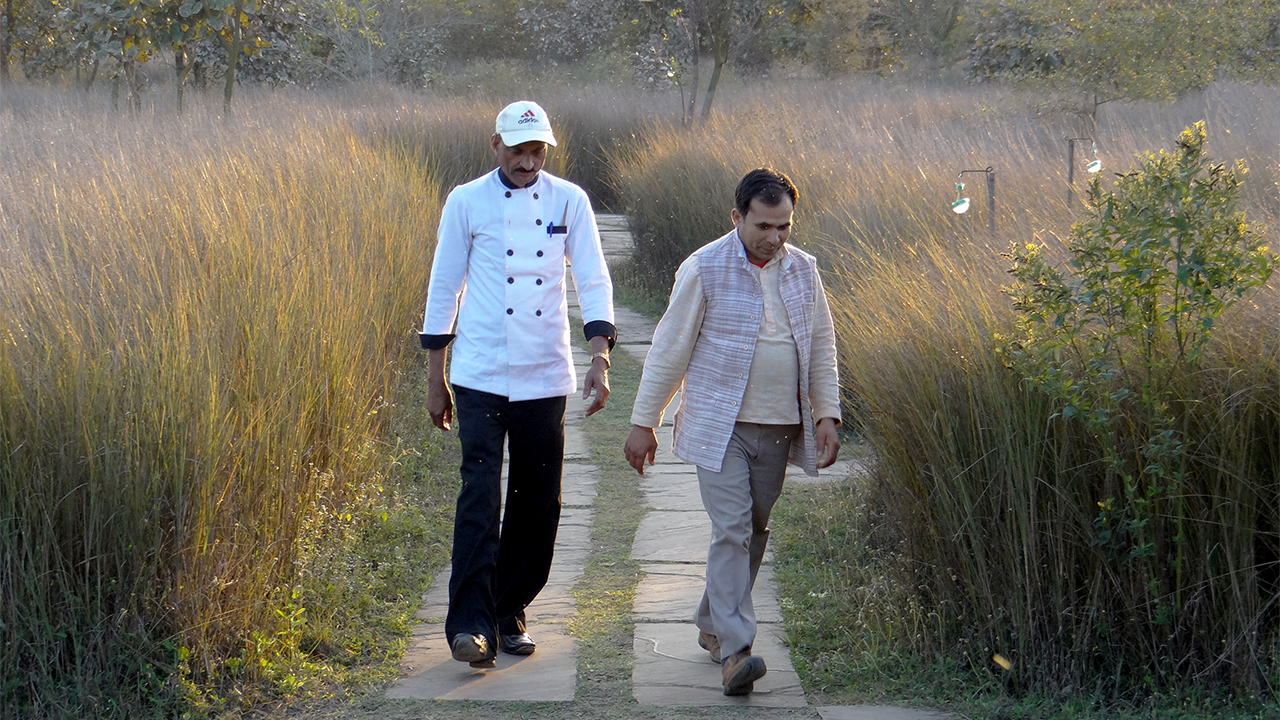 Our repertoire might have been limited but we had several friends who were great bakers.  When they came to stay, their ‘payment’ was to leave with us one of their favourite recipes.  This was a great success and Rakesh loved learning new dishes and was soon enjoying cooking Sarai at Toria style. The challenge of course was to replicate the recipe once the friend had gone. Each oven works differently and recipes have to be standardised for our equipment. Sometimes, it took us five or six attempts to get it right. But once we did, Rakesh could reproduce it every time with perfection. We find that if a recipe works perfectly the first time, it would be very rare to get it right the second time. Our maxim: failure is needed for perfection. This way you learn what not to do. So Rakesh enlarged his repertoire and we were able to overcome the problem of trying to change old habits. Of course some of his recipes were delicious and appropriate so we kept those, like crème caramel, his choux pastries and his wonderfully cinnamony apple pie. He once told us that had learned more recipes at the Sarai at Toria than in his entire baking career! We continue to add new recipes and drop old ones; his list now includes over thirty-five dessert recipes made only with ingredients available locally. 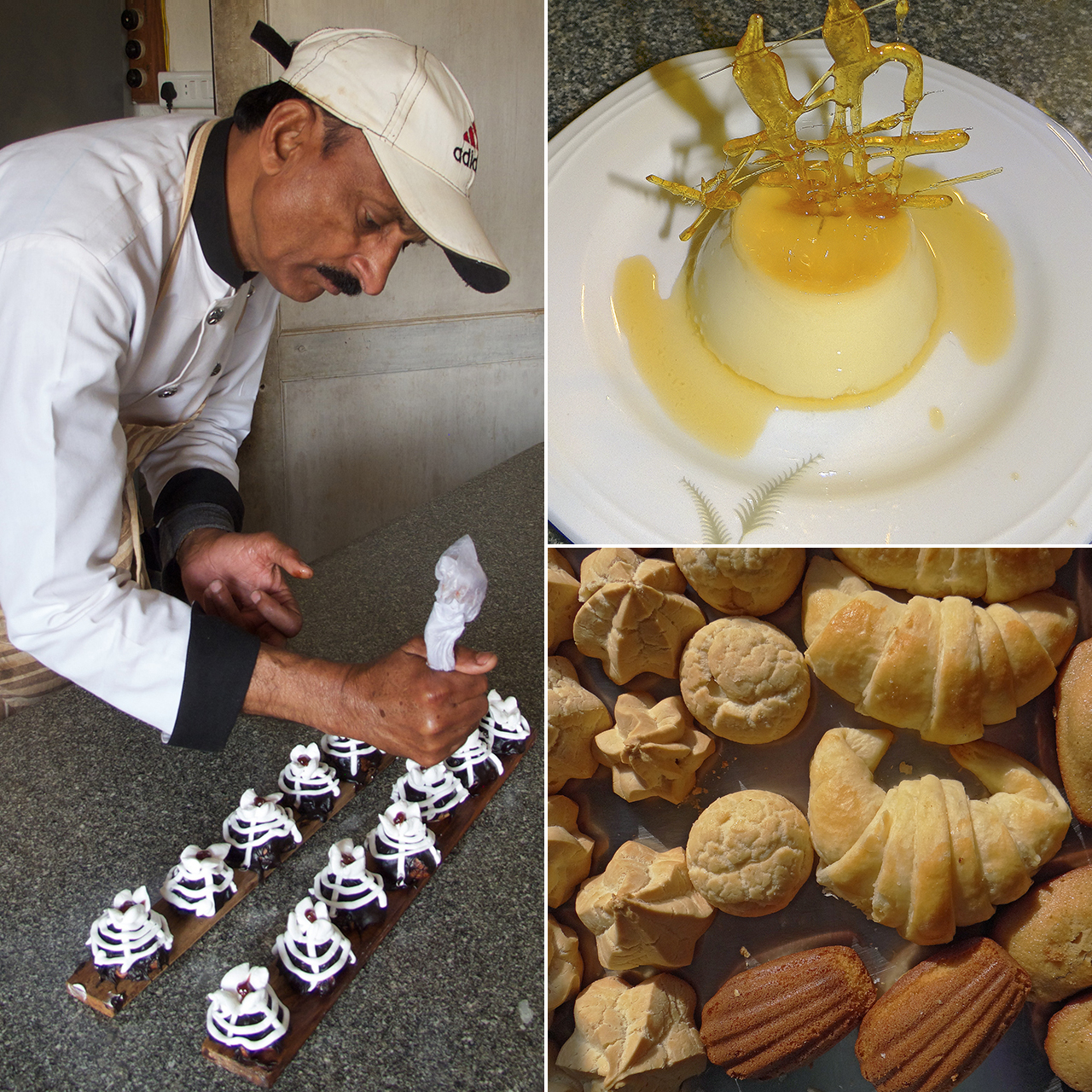 He is one of the fastest workers we have come across. This is not always an asset as we discover when we need to rethink a menu or change it for specific guests’ requirements. Once he is told the dish even five minutes later, he willl have already done so much prepartaion, it is too late to change. His energy level and dedication is particularly remarkable for a 60-year-old. A devoted Shiv bhakt, he is the first one up, at 4.30-5.00 am without fail. He is very disciplined and generally fairly sombre but there is one day in the year when he transforms. Meet Rakesh on Holi and you see a different man. There is no member of the entire Sarai at Toria family who can match his dancing. His spirited energy ensures that every Holi is a celebration to remember. 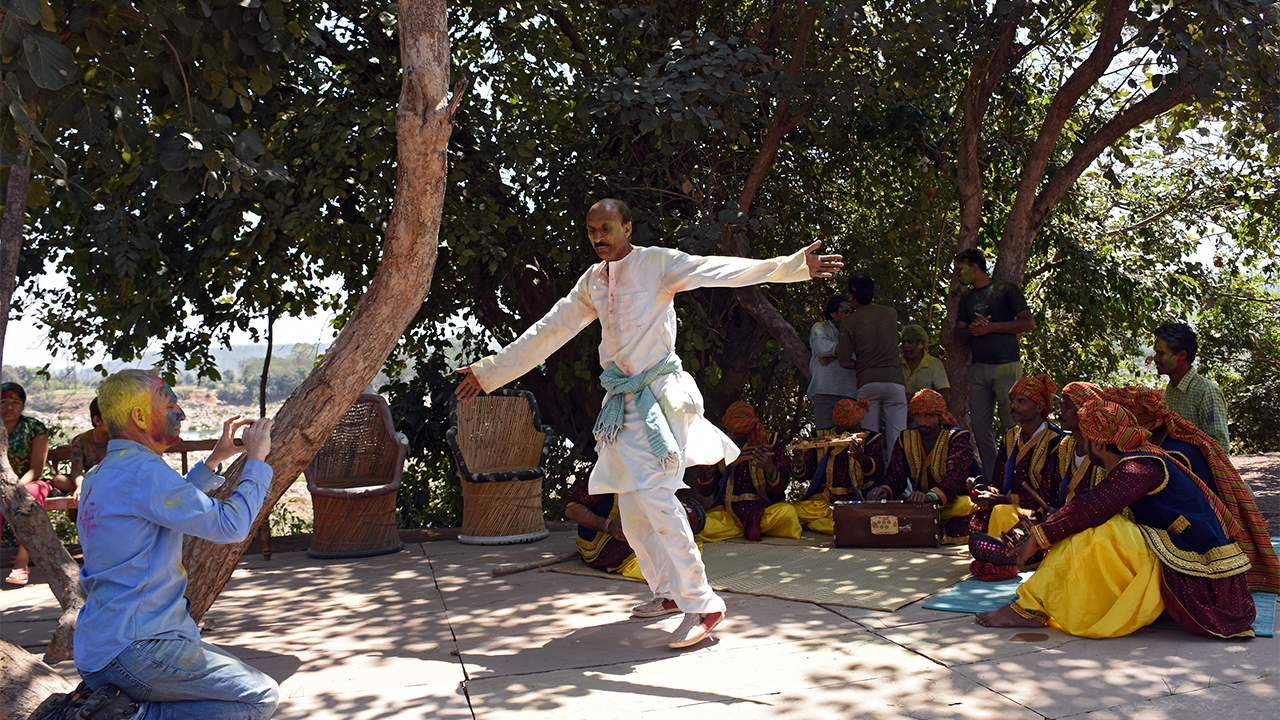 I doubt you will find a slimmer pastry chef in all of India! But I am afraid his desserts have to take some responisbility for our guests complaining that they put on weight at the Sarai when they had expected to lose weight in India! There are many favourites from his repertoire. The ‘Oo La La’ of our French guests on eating his Chocolate roulade speaks volumes (thank you Charlie); the Profiteroles with homemade vanilla ice-cream slip down surprisingly easily too. His Lemon pudding (or souffle with gooey goodness at the bottom) goes brilliantly after a spicey meal and is gentler on the waistline (thank you Cathy).  But Tiramisu is Raghu’s favourite – it is made from scratch with our own freshly made cream cheese and is very light. Joanna’s sister, Emma Horne’s recipe for Sticky-toffee Pudding, is a killer and another of Raghu’s favourites. Rakesh now does it so well that even some of her family think it is as good as hers (or almost!). And even Joanna’s signature Cheesecake has morphed into new forms at the Sarai at Toria under Rakesh’s hands. 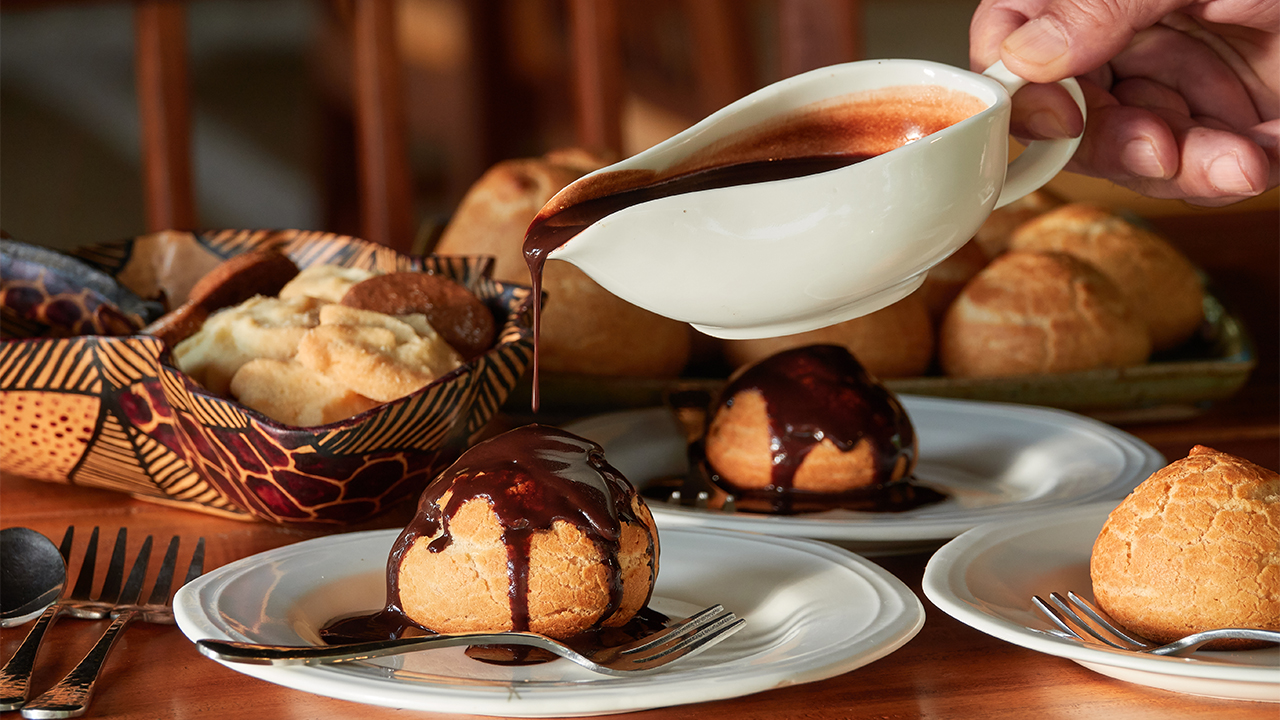 It is not unusual for guests to call him to the table to communicate their appreciation and enjoyment of the desserts and they quite often tell us that the Sarai at Toria’s dessert selection is the best they have seen on their travels. We appreciate this compliment and feel all the more proud of our sweetman Rakesh Singh. But for us, his sweetness resides most of all in his smile! 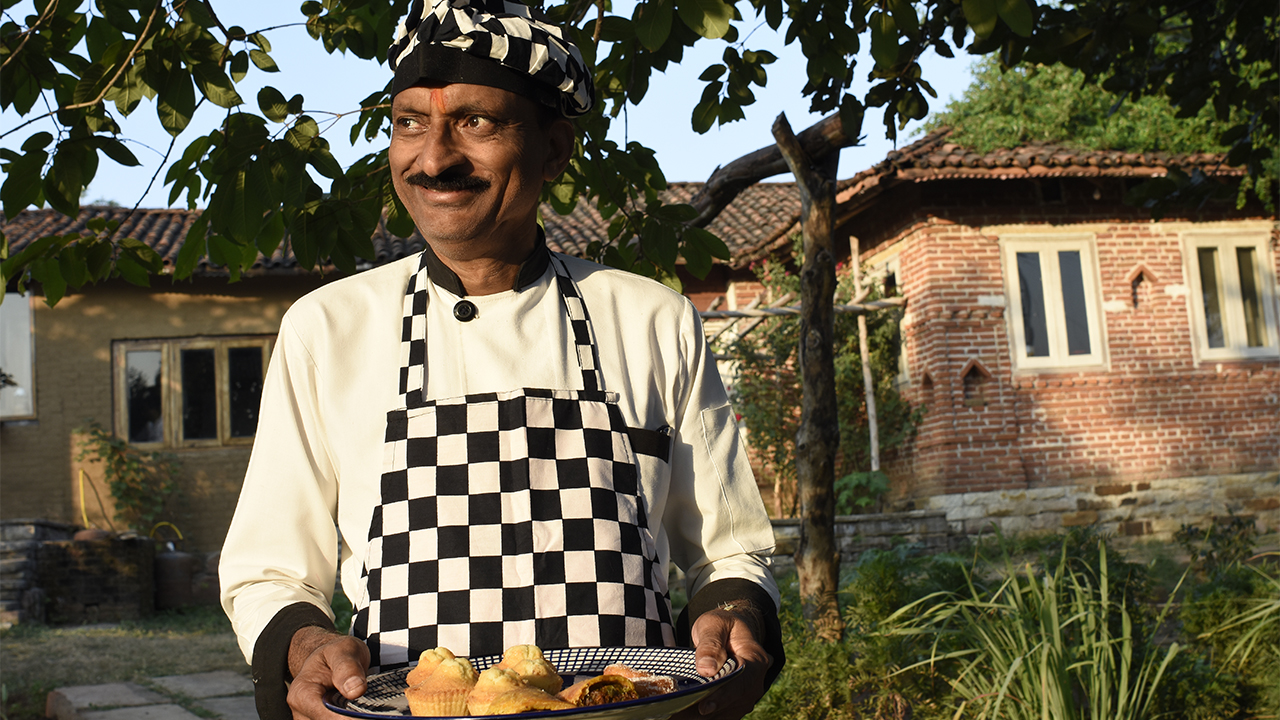