In the heart of historic Madhya Pradesh—Nachna-Kuthara

As is so often the case, it took visitors from outside to finally propel me on a long planned visit to the archaeological site of Nachna-Kuthara. In this case the exploration was thanks to our illustrious friends and guests, Olivia Fraser and William Dalrymple—hard to find better companions for such an outing. 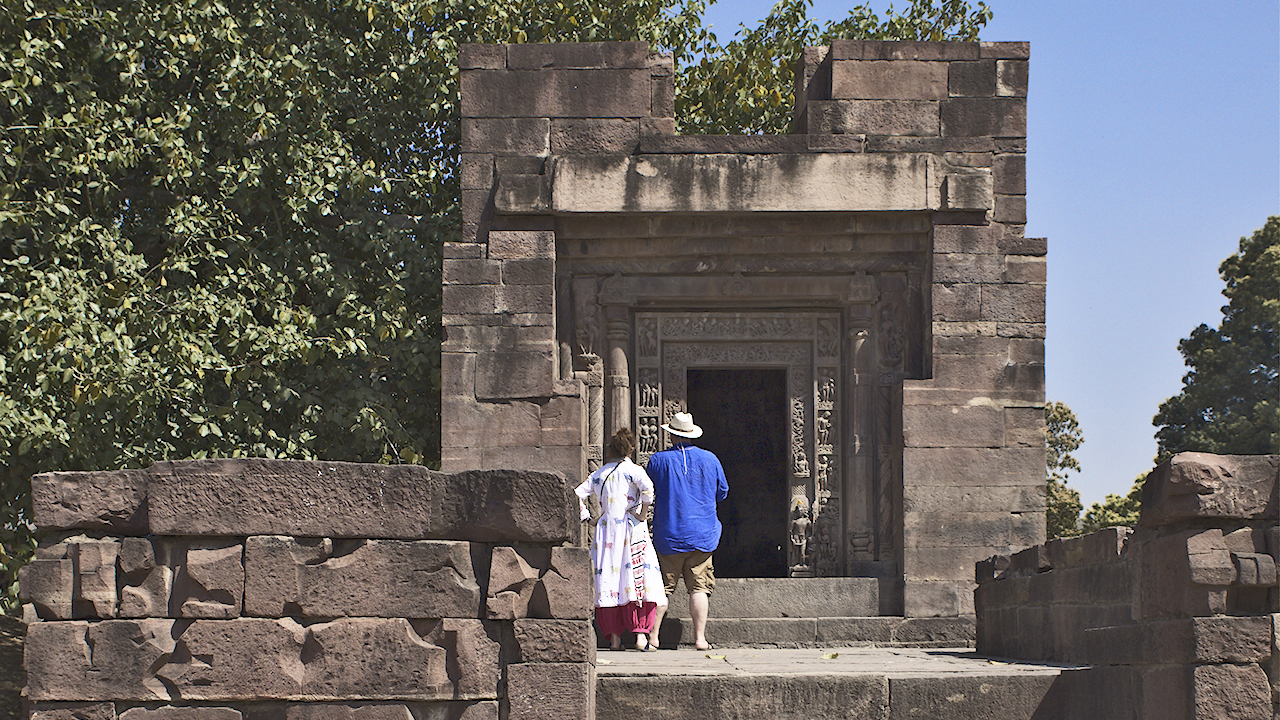 Admiring the wonderfully carved entrance to the Parvati Temple.

With help from google maps, and whatsapp messaging to local friends, we were able to find the route fairly easily—in spite of a left/right confusion in the friend’s instructions! It is approximately an hour and a half’s drive from the Sarai at Toria and since we had taken lunch with us, made for a delightful day’s outing. We set off through the forest and Reserve on the state highway, driving half an hour beyond Panna town to Devendra Nagar where we take a right through peaceful countryside to wend our way to the site near Ganj village. 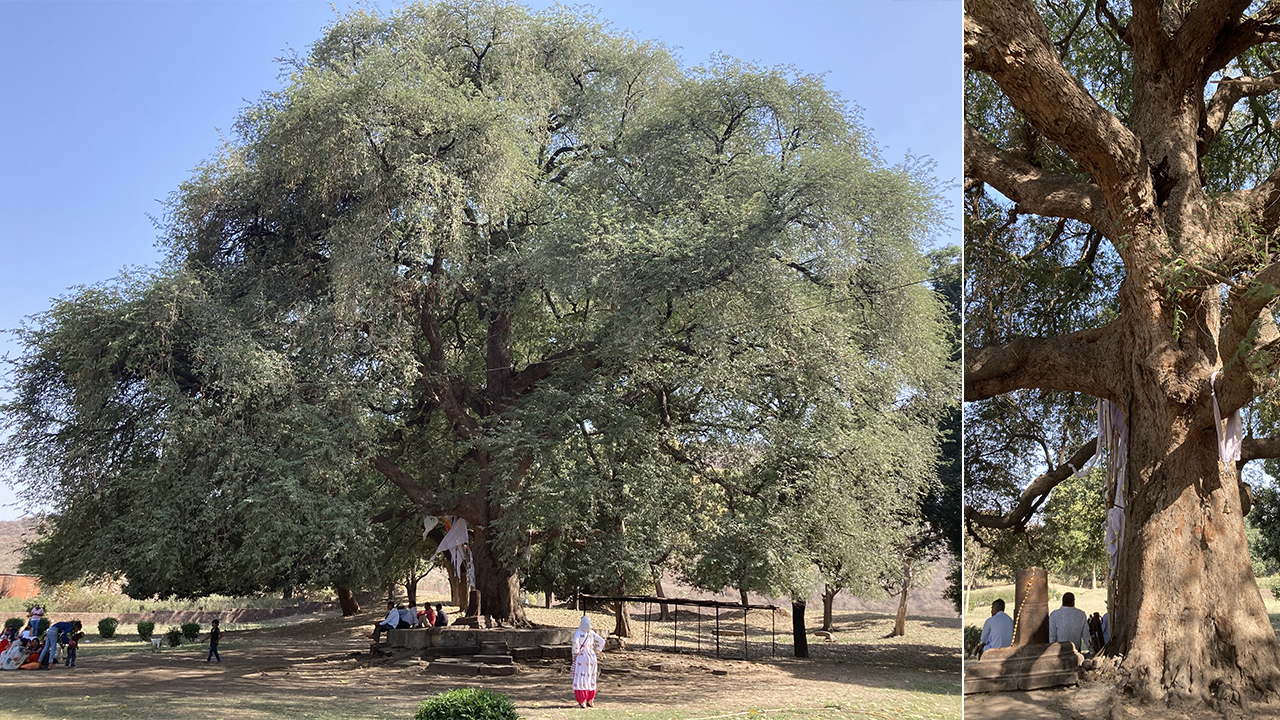 The Tamarind tree is associated with various gods, including Parvati and Shiva, and is often grown within temple precincts. The name comes from  Arabic—Tamar Hind meaning Indian date.

As we approached, I have to admit my eye was first drawn not to the temples but to the huge Tamarind tree in the complex. Tamarindus indica used to be ubiquitous in rural India but over recent years seems to have become more and more unusual; huge numbers become casualties to road widening. I remember feeling distraught on the drive to Jhansi a couple of years ago: the huge carcases of ancient giants lay stricken by the wayside, tamarind, mahua, arjun, neem. The tamarind is a magnificent tree, valuable for its shade and fruit as much as its timber. It can live for several hundred years. 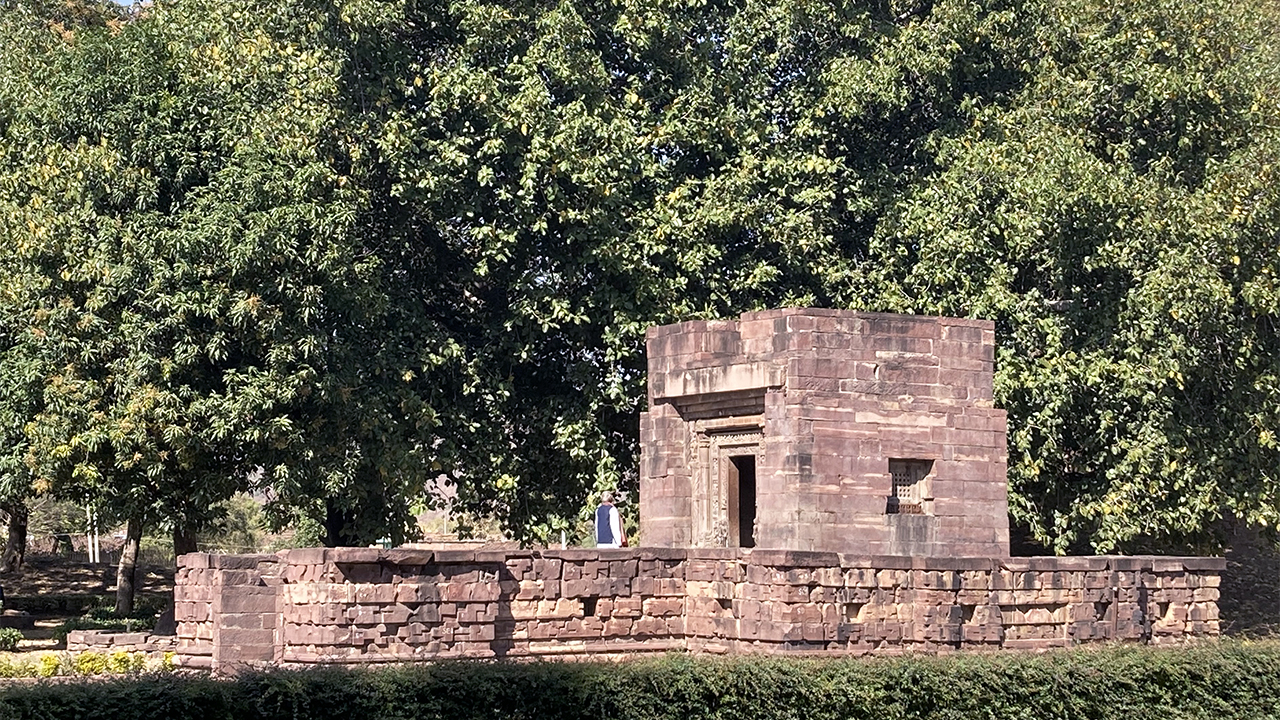 Younger but larger, the tree complements the two temples and makes a third venerated triangular point with them. We headed towards the first, an unassuming, rather plain-looking little stone structure—the Parvati Temple. This is believed to be one of the earliest stone temples in central India dating from the 5th century Gupta period (Gupta Empire 4th-6th century). Contemporaneous to the building of the Ajanta caves, it has been postulated that the artists may have come from the same school, even though the sites are over 600 kms apart. 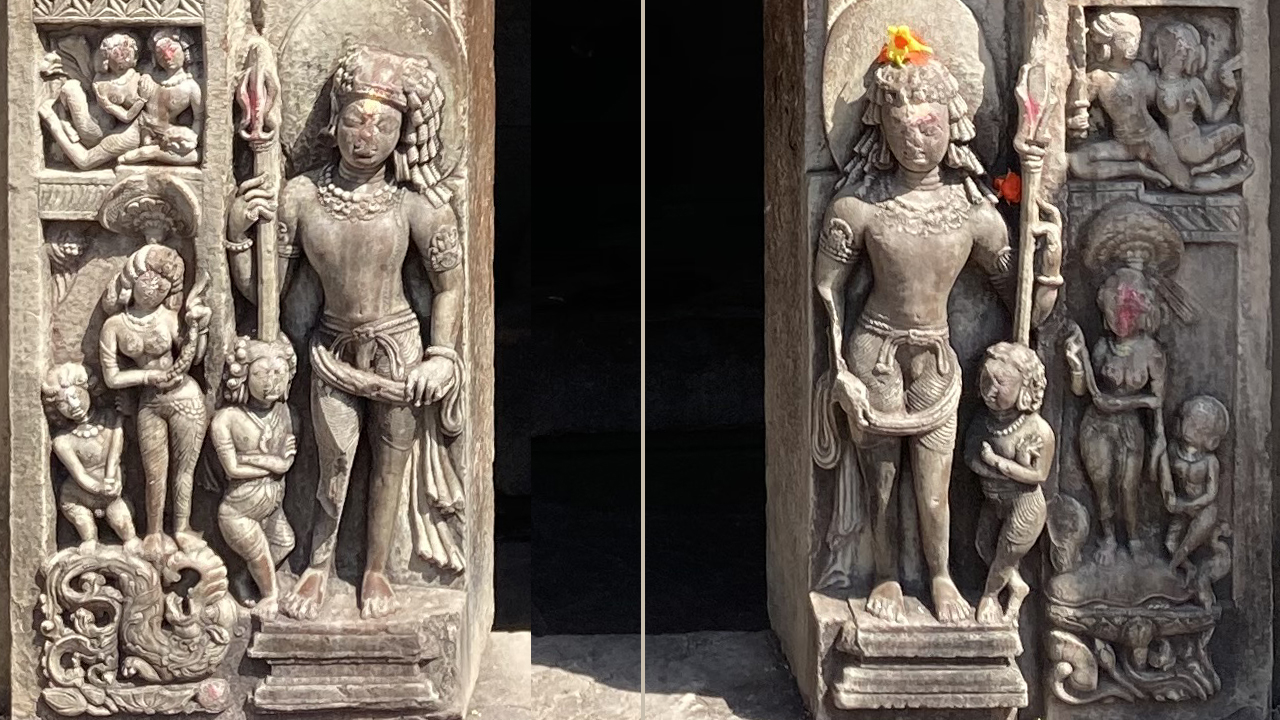 The entrance into the sanctum is flanked by graceful Shaiva dvarapalas (door guardians) and the goddesses: Ganga (left) and Yamuna (right).

The Parvati temple is two-storied; the upper sanctum is a square structure with a beautifully carved doorway and delightful jali (trellised) windows at the sides. There are many wonderful carvings to discover and since I enjoyed the surprise of these, and hoping that you, gentle reader, will be tempted, and able, to visit, I will refrain from over-describing the temple building and attractions. The British engineer, Alexander Cunningham had brought these temples to the attention of western archaeologists in 1885, noting they were known and visited by the local populace. Indeed he thought Nachna-Kuthara, as he called it, might have been an ancient capital of Bundhelkand. 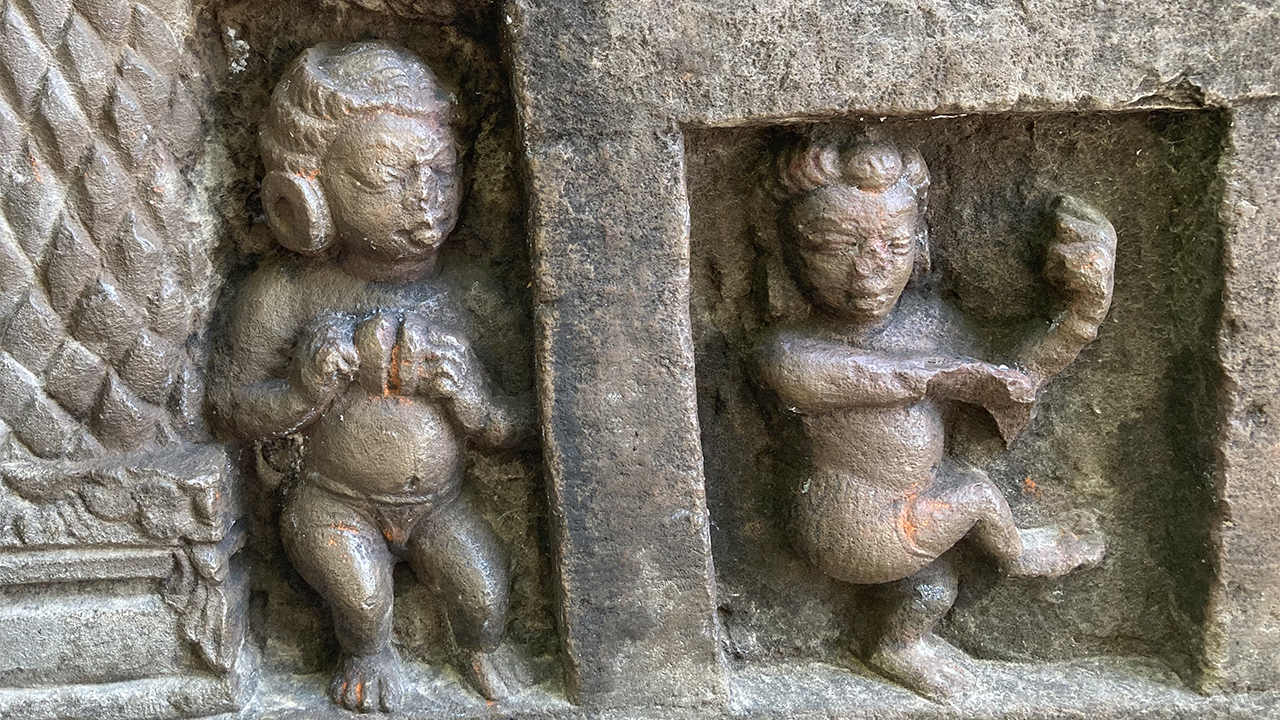 Unusually the Parvati temple faces west; on exiting one sees ahead the east-facing, lion-flanked entrance to the other major temple of the complex, the Chaumukhnath Temple.  This Shiva temple structure is also square and has a similar door surround, but otherwise is very differently designed from the Parvati temple. 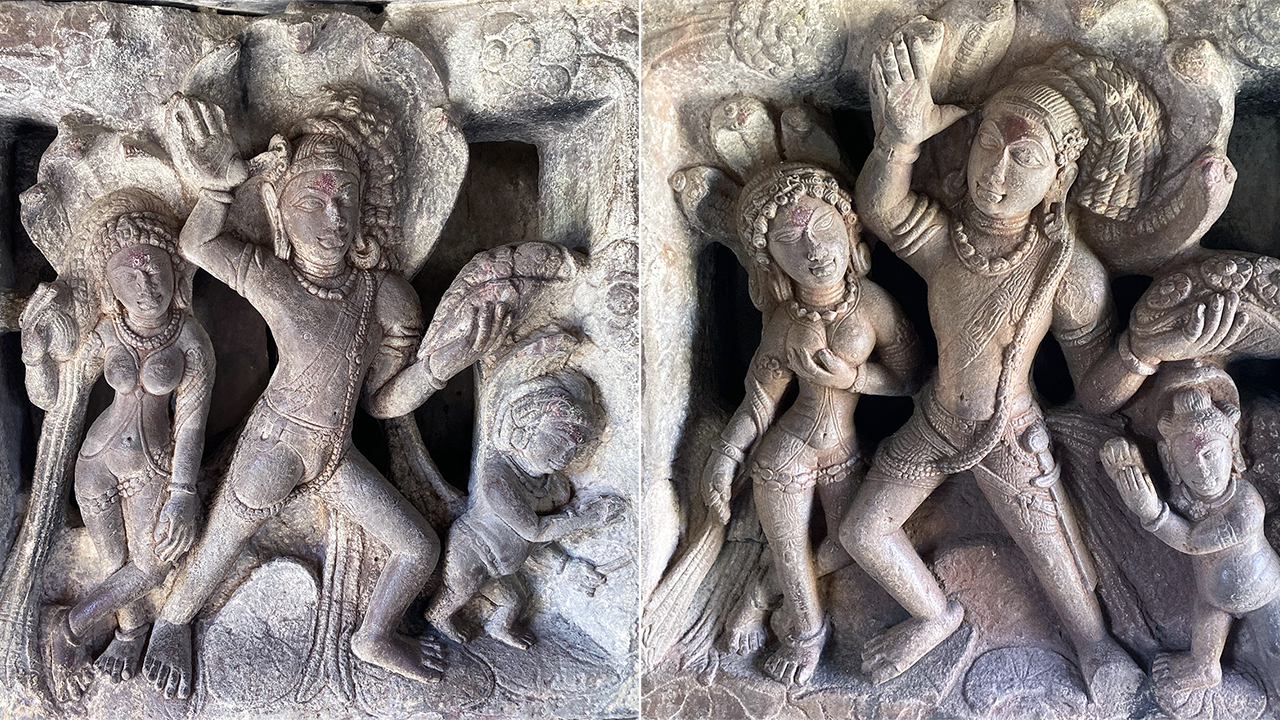 The temple walls include some beautifuly carved panels like these two, depicting Naga kings and their bejewelled wives

Although the original temple was probably built at the same time, the present upper story was likely reconstructed a few centuries later in the Pratihara period. The Chaumukhnath temple has more decorated external walls and a ‘mount Kailash’ spired top, approximately 40 feet tall. Here too there are unexpected wonderful carvings in the stone walls and jali windows but the truly breathtaking sculpture is in the inner sanctum room, the one from which it takes its name—a Shiva-lingam with four faces. Truly sublime! Even my expert, well-travelled companion was impressed, and we found it hard to tear ourselves away. 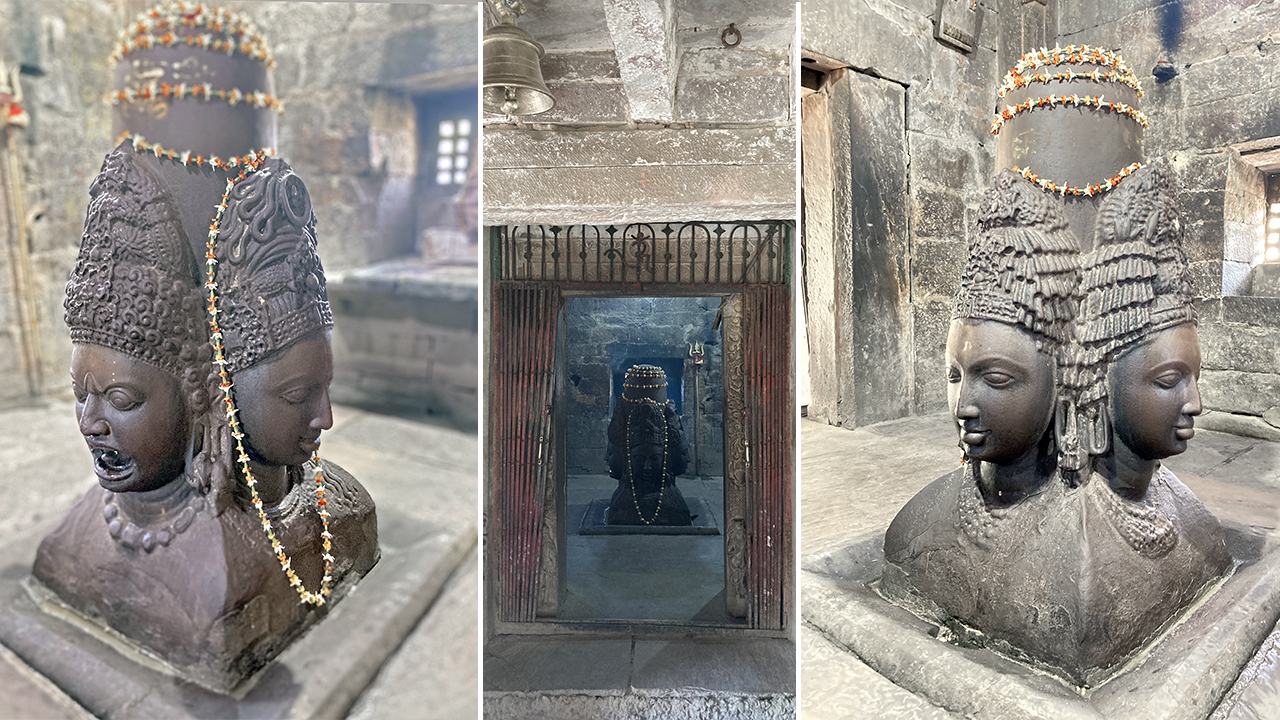 The lingam is believed to date from the 8th C CE. Three of the faces emanate peace and calm while the fourth agitates with its  open-mouthed,  bulging eyed, electrifying look. The faces represent the Panchamukha aspects of Shiva iconography.

The ruins of several more temples can be explored in the surrounding area and there are wonderful landscapes views to be seen too.  There is also a small museum but unfortunately when we visited, the man with the key had gone on two weeks holiday so the excitements of this remain for another visit!